Be part of our International horses for your chance to win in the Melbourne Cup!

Australian Thoroughbred Bloodstock offers our clients the opportunity to race horses in Group races in Australia and worldwide. Racing with us on an international basis gives everyone the opportunity to get involved in very serious horses that travel to different countries and compete at the highest level.

Southern France is our most recent International purchase and runner in the Melbourne Cup, and although finishing a disappointing 19th, as a young stallion will stay in Australia to race against the top level for seasons to come.

We also purchased another stayer, South Pacific who has yet to race in Australia. Both horses are trained by Ciaron Maher & David Eustace.

A list of our International purchases and results are detailed below.

After placing 5th in the 2017 Melbourne Cup, ATB purchased 50% of Scottish galloper Nakeeta. In 2018 Nakeeta finished 12th in the 24 horse field keeping the owners in the prize money pool.

Australian Thoroughbred Bloodstock purchased 50 per cent of Tiberian in December 2016, with Dance declaring him his 2018 Melbourne Cup horse. But a G3 win over 2500m at Deauville in August was followed by a G2 win over the same course three weeks later, leading French trainer Alain Couetil to pencil in a flight to Melbourne 2017.

In 2016 we obtained shares in Irish galloper, Heartbreak City trained by Tony Martin and went within a head of winning the 2016 Emirates Melbourne Cup, finishing 2nd with star jockey, Joao Moreira riding. It was breath-taking stuff, the closest we have been to collecting racing's holy grail.

In February 2014, we purchased a controlling interest in European Group One winner Seismos to contest the Caulfield and Melbourne Cups that Spring. Seismos won at Neuss in Germany at his first start for Australian Thoroughbred Bloodstock and competed on Dubai World Cup night for his new and current owners, with trainer Andreas Wohler in Germany.

Our previous international galloper Dandino travelled to the United States in August of last year to win the 2013 American St Leger at Arlington in Chicago, just as Jakkalberry did the year before. Dandino then travelled to Australia to finish runner-up in the $2.5 Million Group 1 Caulfield Cup behind Fawkner at Caulfield, before finishing a gallant 5th in the 2013 Melbourne Cup behind Fiorente.

On returning to Melbourne for the 2014 Spring carnival, unfortunately Dandino broke down with an suspensory ligament injury and retirement loomed.

It was decided that he stay in Australia, and was sent to stud in the Spring of 2016.

While he missed running in both the Caulfield and Melbourne Cups, he did claim the Group 3 Queens Cup on the last day of the Flemington Spring Carnival for a well deserved win.

In his 15 starts for ATB, Dandino earned almost $1.35m in prizemoney.

Our horses have competed internationally in Dubai, Royal Ascot, Rome, and at Arlington in Chicago, with Jakkalberry and Crackerjack King both winning and our owners collecting over AUD $1 Million in prize-money. Jakkalberry also won the Group 2 Dubai City of Gold at Meydan in Dubai in March 2013 and ran a fantastic 3rd placing behind Green Moon in the 2012 Melbourne Cup. He was retired earlier this year after failing to recover from a leg injury.

French international Tac De Boistron returned back to the UK in search of wet tracks and at his fourth start for new trainer Marco Botti he scored a 5 length victory in the Group 1 Prix Royal-Oak at Longchamp racecourse in France.

Our Group 1 winning South African mare Chocolicious was mated with unbeaten superstar Frankel and sold at the 2016 Sydney Easter Inglis Sale for $610,000.

Want to join us in racing a Melbourne Cup horse? 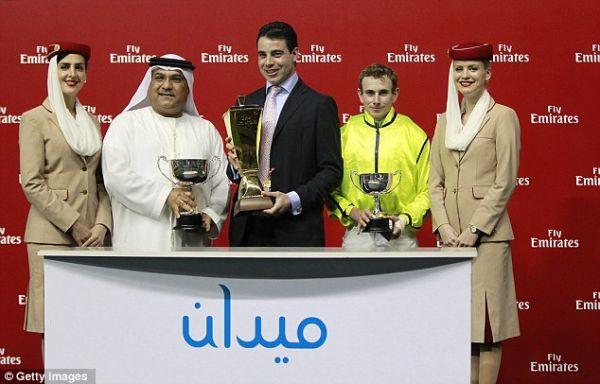 Each year we will be securing new horses to race internationally, while also looking to bring the right types to contest our big Cups during the Melbourne Spring Carnival.

The Melbourne Cup is the race we would love to win, and it is something that we'd love to share with you.

It's affordable for everyone, as small percentage shares are always on offer in every horse that we purchase.

When our horses compete internationally, we can arrange travel packages for all of our owners to attend – its great way to experience International racing – view our ATB Tours page to see details on previous tours.

Register your interest in a horse today!

Email Darren Dance at ATB to register your interest and start racing internationally the ATB way!