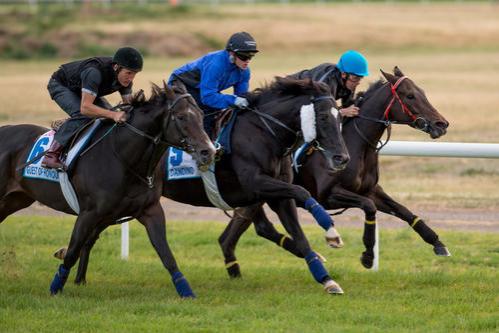 On Sunday October 5th Dandino and Guest Of Honour had their first serious work at Werribee Quarantine Centre since arriving in Australia. Adding to this was that two of the best jockey's in Australia were steering them!

Trainer Marco Botti decided to add winkers to Dandino's gallop to switch him on, and it worked. Craig Williams and Danny already have a good relationship with Craig riding Danny to a second in last years Group One Caulfield Cup. Post trackwork Craig said "I am delighted with Dandino this morning,  this is the second time I have been on him since he arrived in Australia. We positioned Dandino in front this morning during work and went over 1400m in easy time and quickening from the 600m, the horse could not have went any slower and I had so much horse underneath me. He's getting his weight right, his coat is getting finer and shiny and I am thrilled with how he worked this morning. Providing its ok with Marco I will come down and ride him a few more times as I enjoy the preparation leading up to these big races and being able to monitor his progress."

Guest Of Honour also worked well with Damien Oliver on board. After trackwork Damien said, "I was very pleased with Guest Of Honour, he is a happy, bright and relaxed horse. It was a nice piece of work with Dandino this morning, we sat off Dandino until coming around the bend and then we gathered him in and both worked to the line strong both with a little bit in reserve. Going into the Toorak I think the horse will run well, he is nice and bright and handled the ground well."

Guesty kicks off our international runners this weekend on Caulfield Guineas Day. ATB also have a local brigade contesting Group One and Two races in Crackerjack King and Platelet respectively.

Five more sleeps until kick off!

The following is footage of Sunday morning's trackwork: