The ATB International Team Has Arrived!! 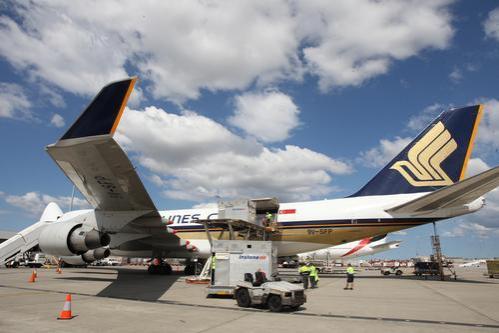 While most Victorian’s were glued to the television watching the 2014 AFL Grand Final, ATB’s Darren & Liz Dance and Shona Drechsler were greeting Dandino, Guest Of Honour and Seismos who touched down in Melbourne on Saturday.

Like excited expecting parents we eagerly awaited on the Goldners trucks who were carrying nineteen International horses who are all here to contest the rich spring races throughout the Spring Carnival.

Dandino was the first horse to step off the truck and he looked fantastic. He was cool, calm and collected. A seasoned traveller, travelling to Australia was nothing new to him, he placed 2nd in last years Caulfield Cup and 5th in la

st years Melbourne Cup. Only 6 weeks ago Dandino wasin America contesting the Grade One American St Leger, winning this race last year, he placed second in it this year. Dandino travelled well, eating and drinking up and only lost 10kgs from the flight. No doubt Dandino will take no time putting this weight back on from hydration and a pick of grass.  Dandino will kick off his Australian campaign in the Crown Golden Ale Caulfield Cup Day October 18th and will then go on to the Emirates Melbourne Cup.

Next off was Seismos, he paraded beautifully and the remarks from Darren & Liz after seeing the horse under a previous trainer in Hong Kong & Dubai, was how much improvement ATB’s trainer Marco Botti had made with him. Since arriving in Marco’s stable he has put on about 50kgs and comes to Australia a last start winner in the Group Three Geoffrey Freer Stakes. Losing only 8kgs on the way over Seismos will regain this once relaxed in his stable and once rehydrated. Seismos has his first race in Australia in the Crown Golden Ale Caulfield Cup followed by the Emirates Melbourne Cup.

A short while later Guest Of Honour graced us with his presence. He looked to be in magnificent condition. ATB’s most recent international purchase travelled well, eating and drinking plenty, he lost no weight at all. Guest Of Honour comes to Australia a last start winner winning the Group Two Fred Cowley MBE Memorial Summer Mile Stakes at Ascot. Guest Of Honour travelled fantastically and lost no weight on the trip.  Guest Of Honour will begin his Australian race career in the Group One David Jones NBCF Toorak Handicap, after this we are hoping his next race will be the Sportingbet Cox Plate at Moonee Valley.

ATB and fellow owners of all three horses are extremely excited about this coming spring and we can’t wait for the first member of the team Guest Of Honour to kick off in the Group One Toorak Handicap on Caulfield Guinea’s Day, October 11th.

ATB are already in the process of securing a new 2015 Spring Carnival team, so if you would like to get involved, simply register your interest by emailing shona@atbloodstock.com.au or phone Shona Drechsler on 0408 427 414 or Darren Dance on 0417 616 666.