In Manna We Trust!! 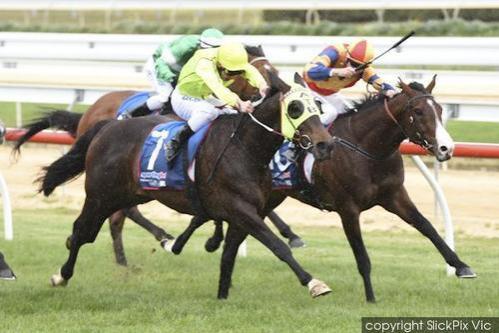 Manna Trust headed to a city class meeting held at Mornington on Wednesday September 17. With his previous runs at Donald and Swan Hill, he didn't know it was city class and it was just another outing for the very relaxed Manhattan Rain gelding.

Manna Trust contested The Grand Hotel Frankston Plate worth $25,000 on a Good 3 over 1200m wearing blinkers for the first time.

Ridden by Ben Melham, a local at the Mornington track, Manna Trust jumped away from barrier 7 carrying 56kgs.

On the way to the barriers, Ben said Manna was very keen and thought he might race through the bridle during the race, however Ben managed to get cover through the race and the gelding relaxed beautifully for him. Although still racing green coming into the straight the gelding stretched his neck out and tried his hardest. He went on to win by 0.1L.

From his three starts Manna has a first, second and third beside his name along with $18,750. However I have a feeling this is only the beginning for this boy!

ATB purchased this boy at the Gold Coast Magic Millions sale in 2013. The vendors David Kobritz and Teresa Poon of Musk Creek Farm who are Victorian based, loved this boy so much they decided to buy a share in him.