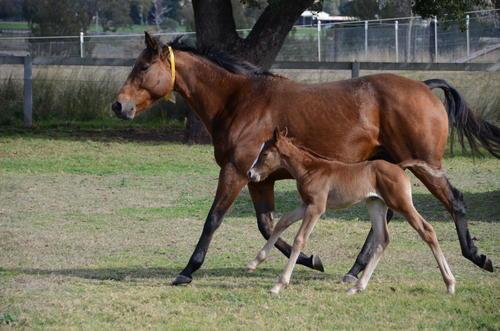 Chocolicious was acquired by ATB and partners in 2012. We raced her on for one season in South Africa and then transferred her to the United Kingdom stables of Marco Botti with the intention to prepare her for the Royal Ascot meeting. However with the long quarantine period exiting South Africa and other delays with her departure we arrived too late for Royal Ascot. We then decided to try and acclimatize her to race in the UK in 2014. We were then approached by Judmonts Farm who stand Frankel to see if we were interested in breeding her to Frankel Southern Hemisphere time in the season of 2013. In the season of 2013 Frankel covered 21 mares in Southern Hemisphere time including the Australian mare More Joyous for John Singleton amongst others. We were lucky enough to get an early service to Frankel and the mare fell in foal.

ATB then decided to ship her to Australia to breed on with her Southern Hemisphere time and have been lucky enough to breed an outstanding Frankel Chestnut filly. Darren Dance went and inspected this filly in Scone at the end of August. Darren describes the filly as being very correct in front and with really good leg underneath with a great head and body.

Chocolicious is doing a great job of being a mum and she is loving her foal. At this stage ATB and partners are undecided what we will do with the foal. Over the next 12 months there will be discussions with the partners on whether we keep the foal to race or whether we sell her at the Inglis Easter yearling sale.

Chocolicious is a South African Group One winning mare, and winner of six other races. She won the Scottsville Allan Robertson Championship Group One race over 1200m and she was a high class sprinter in her day in South Africa.

She also ran 4th in the Group One Scottsville South African Fillies Sprint and she placed in a Group Three at Meydan, Dubai. Chocolicious is by South African sire Kahal who’s a son of champion sire Machivellian. She is out of a mare called Candy Box who was by Exclusive Patriot and carries a double cross to Raise A Native.