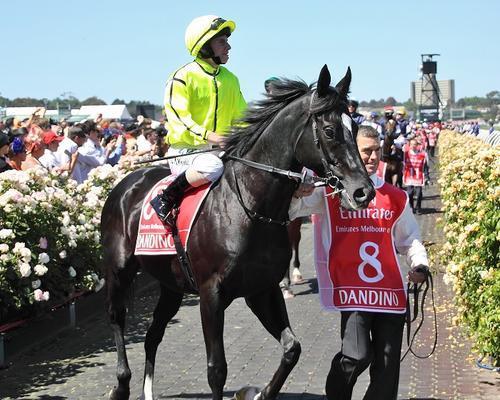 Australian Thoroughbred Bloodstock`s international horses came to the fore again over the past weekend with Dandino (pictured) running second to The Pizza Man in the 2014 edition of the American St Ledger. Frankie Detorri gave him a great ride and he finished the 2700m race off powerfully to be beaten under a length after standing the leader up some 5 lengths on the turn at the 400m mark. The race record was smashed by some 2 plus seconds meaning Dandino ran some 12 lengths faster in this year’s race to finish 2nd than last year when he won the race. He is track for the 2014 Caulfield and Melbourne Cup later this season

Both these horses have pulled up well and providing all goes well in work and with travel to Australia they are on track to contest their next race in the 2014 Caulfield Cup and then the Melbourne Cup.

Joining these two on the plane this year will be Guest of Honour (red cap)- our latest acquisition – purchased in July after his stunning Group 2 win at Ascot beating the well known Mull of Killough and Long John (2013 Caulfield Guineas winner). An improving type who settles near the speed and loves firm ground, Guest of Honour is expected to contest the MRC Toorak Handicap and then possibly the Cox Plate or the McKinnon Stakes. Post the spring of 2014; Guest of Honour will remain in Australia under the care of David Hayes to contest our rich autumn carnival.

Tac De Boistron - failed in Australia, sent back to the UK and now a Group one winner in France  and arguably the best wet track stayer in the world.

Seismos - Purchased in February and Group 3 winner at his 3rd start for Marco Botti. Serious cups contender in 2014.

Kelinni - Purchased in December and sent back to the UK to see if Marco can get him back to his 2012 form, has yet to fire but Marco is confident that he will.

We are very pleased that our plans are coming together and that we will (hopefully) have three good, fit and sound horses who are in outstanding form coming to Australia to contest the big Group One races in the Melbourne Spring Carnival that only three years ago where were just fanciful dreams of ours.

We still pinch ourselves that this is happening and when we look at our results over the past three years, we are thankful to have outstanding agents in the UK and to have linked up with Marco Botti. We spent 12 months devising a plan and criteria to select these horses and so far all of our purchases have measured up to the grade and competed very well on the world stage.

We have now identified two young stayers in Europe that we believe will develop over the next year or two into the next Jakkalberry, Dandino or Seismos. We are going to attempt to secure these two horses in the coming months whilst their price is somewhat moderate and take them through the class rise required to get them qualified for the 2015 and 2016 cups.

On offer locally we have on offer a very athletic colt by Stratum out of an international mare Belle Famille. As you can see he is an athletic type, he walks well and enjoys his work. There is currently 30% remaining in this colt with a 5% share starting at $4,750. This colt is to be trained by leading Victorian trainer Darren Weir. For more information on this colt visit the following page http://stratumxbellefamillecolt.atracehorses.com.au

Please feel free to call us to discuss how to get involved in this journey and experience the thrill of the mounting yard as an owner on Cup Day, we can make it happen for you.