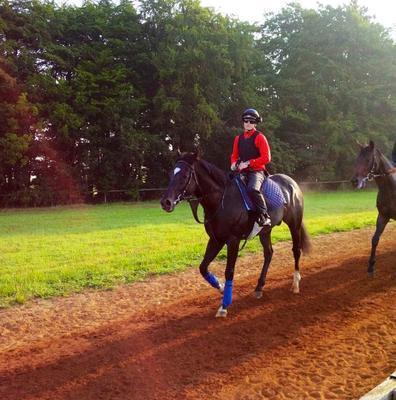 World class jockey Craig Williams was reunited with Dandino at Marco Botti's Newmarket Stables on Friday for a trot and canter and again on Saturday morning for a serious gallop.

Craig Williams first rode Dandino when finishing second in the 2013 Caulfield Cup. Craig is currently on a working holiday through Europe after his two month stint in Japan as well as riding in Turkey as part of a jockey challenge.

While in Europe, Craig has also been riding work in the stables of Charlie Hills, Andrew Balding, and David Redvers. Next week Craig plans to head to France where he will ride out for Mikel Delzangles. He may also head to Ascot to compete in the Shergar Cup on August 9.

ATB were extremely happy that Craig could get back on Dandino and give us a report where he could compare the son of Dansili, who is still an entire, on his progress and how he thinks he rates compared to when he rode him last year. Craig said “I was very happy with him this morning,” he said. “He felt a lot different here than he did when I rode him in Australia. Over there, it’s like he’s on his holidays and he’s really full of himself, whereas here he knows the routine well.

“He was moving really well, which is great for a horse of his age. I’ve got a good relationship with Marco, so it’s great to be able to come here and ride out for him.”

All going well Dandino will head to America to contest the St Ledger again, where we hope he can win it two years running. After that he'll come across to Australia where he will be aimed for the Caulfield and Melbourne Cups. Dandino placed 5th in the Melbourne Cup last year with Craig reporting "the distance will not be problem for him."

To read more on Marco Botti and his team that he will hopefully be bringing across to Australia please click on the following link:

To view trackwork footage of Craig Williams and Dandino please head to our home page and click on the video.