Guest Of Honour Gets An Owner For A Day! 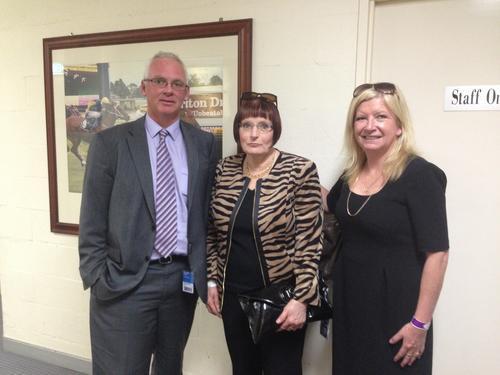 Not only was Memsie Stakes Day at Caulfield a big launch pad for some big names in Spring, but it was a day that Australian Thoroughbred Bloodstock and Melbourne Racing Club worked together to give MRC members a chance to experience being "an owner for a day!"

ATB played a major part in Memsie Stakes Day in sponsoring the Listed race formerly known as the Heatherlie Handicap. We also ran a competition for MRC members to enter for people who had never owned a racehorse. The prize of the competition was a 1% share in Guest Of Honour for one day only when he contests the Group One Toorak Handicap. The first 20 entrants were taken to a day of dining and were lucky enough to be given a tour of the inner sanctum of Caulfield Racecourse.

We were shown around the winners rooms, the trainers room, along with the scales area and jockey's room. These places are generally only available for licensed people so a big thanks goes to Josh Rodder and the MRC for allowing us to do so.

MRC member Beryl Graham was the lucky winner of the draw and will join the ATB family on Caulfield Guineas Day to cheer home Guest Of Honour.

ATB will be holding a function on both Guinea's Day and Caulfield Cup Day at the Aquanita Bar or more fondly known as The Dandino Bar. Cost for the Guinea's ticket is $230/head and includes food and drinks, late mail from one of the best tipsters around and Darren might even tell a joke or two... not that that's really all that entertaining!! If you would like to come along please let me know ASAP as tickets are selling fast. Email me on shona@atbloodstock.com.au or phone 0408 427 414.