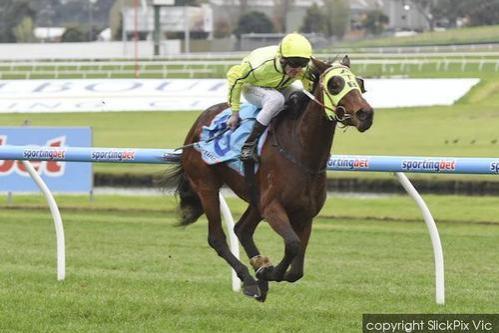 Chloe Anna headed to Sportingbet Park Sandown on Wednesday June 18th as a second place getter three times in a row, she was becoming known as a bridesmaid. Until today! After a frustrating time two weeks ago at Sandown, Chloe Anna went into the race favourite, however she sat down in the gates and was scratched. She had to go and obtain her barrier certificate again which she passed with flying colours!

Chloe Anna went into the Cathay Pacific Plate over 1800m for three-year-olds and upwards as a drifting favourite. Jumping from barrier three with Brad Rawiller on board, Chloe Anna pinged from the gates. She over raced in the early stages of the race and Brad managed to settle her in fourth position being two out two back. Once into the straight Brad let the filly find her balance and in that time read the way the rest of the field would play. At the 400m Brad slipped to the inside running and headed for home. With a few taps of the whip Brad and Chloe Anna put the field away, she went on to win by one and a half lengths. With a month between runs and stepping up in distance, trainer Darren Weir had this filly cherry ripe for this race.

ATB would also like to thank Darren Weir and all his team on another fantastic win for ATB and our owners! A big thanks to jockey Brad Rawiller also for doing such a fantastic job on this filly and the many other ATB horses he partners.