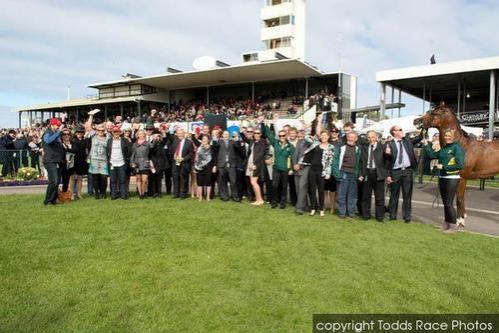 ATB headed to the Warrnambool Carnival with seven individual runners with Shiny Buttons a possibility of racing twice.. and he did!

The runners were spread out between ATB trainers in local Warrnambool boy Matthew Williams and the red hot Darren Weir. Right from the first starter in Already Leica who ran 2nd ATB were up and about early. Although it rained on the first day of the carnival it didn't dampen the spirits of the ATB team and the many owners that came along. We were soon celebrating the win of Shiny Buttons and then the decision had to be made, would Darren Weir back up Buttons in The Sungold Warrnambool Cup... he did!

The second day of the carnival saw ATB with no runners locally, but Internationally we had Tac de Boistron racing at Ascot first up over 3200m. Marco Botti was happy with the grey gelding before the race and Frankie Dettori rode him like the winner he was, he saluted at the winning post and dismounted in his usual star jump style!

Day three of the carnival ATB had four runners to race. The first of our runners saw Reigning Meteor trained by Matthew Williams winning in what was a photo finish, once the results were up the ATB owners let out a deafening cheer! It was a fantastic win and all the owners came into the mounting yard after the race (pictured) and some managed to get their photo with the Northern Meteor colt who was very pleased with himself! Luckyi'mbarefoot did his best to come 2nd and Ticket To Toorak although copped some interference ran on to come 3rd. Shiny Buttons took his place in The Sungold Warrnambool, unfortunately for Buttons he was placed too far back in the field. He ran home strong to finish 4th however some might say he was unlucky to finish 2nd.

In total, all ATB runners netted a total prizemoney purse of $80,605 from The Bool Carnival!!

If you were lucky enough to get down to The Bool, the team at ATB hope you had a fantastic time and enjoyed cheering home all of our runners! If you didn't manage to get there we highly recommend you put it in your diary next year! It really is a carnival that MUST be attended!! We hope to have as many runners next year if not more!

Well done to all winning connections and we look forward to seeing you all there again next year!