Taiyoo Notches Up Two Wins In A Row 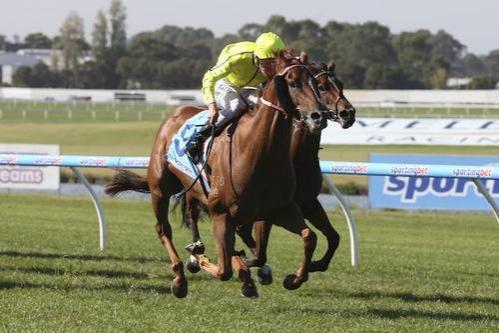 Trainer Darren Weir took four-year-old Taiyoo to Spotingbet Park Sandown on Wednesday March 19th to compete in the 0 – 78 rating TVN Handicap over 1800m. With winning form behind him Taiyoo started favourite at $2.70.

With Jamie Mott on board Taiyoo jumped away cleanly from barrier seven and headed to the front without doing any work. Jamie settled the Haradsun gelding to sit one out and one back from the Robbie Laing trained Sinhala. Taiyoo switched off in the running and Jamie let the boy stroll around with Sinhala not far away.

At the 700m mark Jamie allowed Taiyoo to quicken and coming around the bend Taiyoo was half a length off the leader. At the 400m mark Jamie started to get busy on Taiyoo and he quickened again. At the 350m mark Jamie gave the gelding a couple of taps with his whip and the boy accelerated. At the 100m Taiyoo stuck his head in front and then drew away. Jamie had to keep him going only due to the gelding being so relaxed.

Taiyoo went on to win by two lengths with Jamie easing up on riding him over the finishing line.  It was a great win and both Darren Weir and Jamie Mott were very please with the geldings effort. Having just 12 starts this race took his record to five wins, two seconds and a third, and netting a total of $87,260.