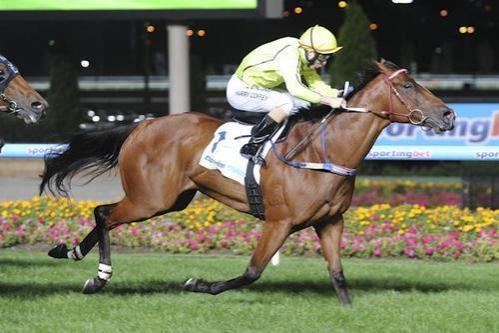 On March 21st 2014 Platelet returned to racing after a 16 week spell to contest the Essendon Mazda 55 Second Challenge at Moonee Valley on William Reid Stakes night.

The sprint race, worth $55,000 ran over 955m is always an exciting race with the fastest horse throughout the series giving the winning trainer a BT-50 Mazda courtesy of Essendon Mazda.

Platelet went into the race carrying the top weight and trainer Darren Weir elected to use gun apprentice Harry Coffey who claimed 3kgs.

Jumping out of barrier three Platelet jumped away from the gates cleanly and Harry allowed the mare to stride up and find her rhythm.  With the majority of the field flying to the front and fighting to sort out their order Harry never panicked and watch them fight for the lead. Coming around the bend Harry had Platelet slide out and went out six wide to get around the field. At the 200m mark Platelet gathered up the leaders and cruised to the front, with her ears pinned back and showing her true fight she went on win with favourite Unanimously coming second.

Post race trainer Darren Weir said “the race worked out beautifully for her, pre race on walking the track we thought that the speed lane was three to six wide from the 600m to the winning post and Harry got her into the right spot and she found the line terrifically. At this stage everything looks on track for Adelaide. She’s a ripper mare to train, is very basic, and walks around the mounting yard like she does at home. A very laid back and casual horse and is just a great racehorse.”

Jockey Harry Coffey said “that he tried to be soft of her throughout the race because there is bigger things in stall for her in this prep than just tonight, but she did really well, I’ve never ridden a horse that felt like that before and at the 500m mark she let down so well and hopefully she can back up her good form from her Group Ones last prep. It was a quality field and she did it easily even though the margin might not say that.”