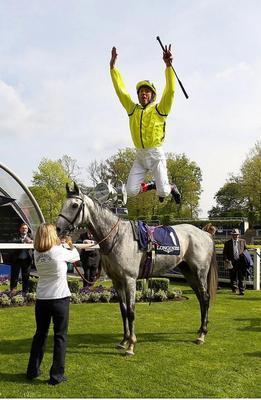 World famous trainer Marco Botti took Tac de Boistron to Ascot to contest the Group Three Longine Sagaro Stakes ran on April 30th. The six-year-old gelding went into the 3200m race fresh from a spell and Marco was pleased with the horse prior to the race.

Tac was second favourite to a very handy horse in Harris Tweed, jumping from barrier three Tac had a few factors going his way. He had Frankie Dettori on board and the ground was soft, the only unknown factor was that could Tac win carrying an extra 3kgs compared to some other very handy stayers in the field including previous Melbourne Cup contender Simenon.

At the 800m mark Tac was positioned three back and one out in fifth position. Coming up the straight Frankie sat patiently and motionless on Tac until the final 200m mark, then he gave the gelding a swish with the reins and rode him hands and heels to the finish line. The Take Risks gelding exploded and went on to win by five lengths.

It was a fantastic effort by Marco Botti and his team to get this geldings to win first up over 3200m carrying the extra weight. The win added just under AUD$62,000 to the gelding prizemoney.

If you would like to get involved in racing an International horse with ATB and our UK trainer Marco Botti please do not hesitate to call Darren Dance on 0417 616 666.