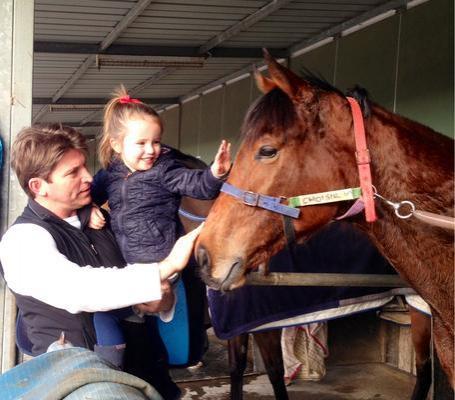 With the sun shining at Cranbourne Training Complex this morning, it was a perfect way for ATB owners to meet their Choisir x Shiny Mai colt who is currently in his breaking in preparation.

The colt who is trained by Robbie Griffiths, took the 10 new owners in his stride and enjoyed plenty of the TLC that was on offer and also posed for many photos.

First up, the fellow owners watched the colt warm up in the trotting ring before making their way up the trainers tower to get a birds eye view of the colt working that consisted of him doing 400m at even time.

After some question and answer time to Robbie we went and enjoyed a coffee with some breakfast at the Cafeteria.

This colt is by CHOISIR, winner of the Group One Lightening Stakes and sire of Starspangledbanner, winner of the Group One Caulfield Guineas. Choisir was also successful at Royal Ascot winning the Group One Golden Jubilee Stakes and the Group Two Kings Stand Stakes. Choisir is one of the best value sires in Australia, he is consistently among the leading sires. He was Champion 2-y-o colt of his year and Lightning Stakes-Gr.1 winner at 3. Leading performers of Choisir include multiple Black Type winners Starspangledbanner, Sacred Choice and Choice Bro to name a few.

Out of mare Shiny Mai (Keltrice), she has produced Black Type winners in Uxorious who is a full brother to this colt and a half brother to Group Three placed Shiny Buttons.

The colt was purchased by Robbie Griffiths at Melbourne Premier Inglis Sales. With Robbie training him and ATB owning Shiny Mai's other progeny ATB were excited to get involved with him.

Robbie is extremely pleased with how this colt is progressing and he is doing everything right. He has a lovely action and enjoys his work. We currently have 32.5% remaining in this boy.