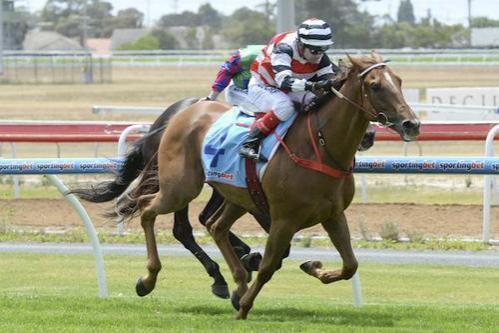 Sir Dylan, Clairvaux and Taiyoo made it three victories in two days for Australian Thoroughbred Bloodstock, following wins at Geelong and Warrnambool during the week, with all three ridden to victory by the in form Dean Yendall.

The gelding put the writing on the wall in recent starts and punters were happy to take the short odds about the Darren Weir trained stayer.

Previously under the care of Chris Waller at Rosehill, ATB’s Darren Dance decied a change of scenery was needed for Sir Dylan, and he brought him to Victoria into the Darren Weir yard.

The horse looks capable of getting over more ground and now that he has broken his duck he could go on with it and reward his patient owners with another victory this time in.

The next day we had three runners at Warrnambool including Clairvaux & Ticket To Toorak from the Matthew Williams yard and the Darren Weir trained Taiyoo.

Clairvaux gave us our second winner in two days when he finished strongly under the urgings of Dean Yendall to win the Subway Homemaker Centre Showcase Tour of Victoria BM70 Handicap (1200), taking his earnings to $55,135 from 3 wins & 3 placings in eight career starts.

It was the 3yo bay gelding’s second win this time in after scoring at Warrnambool in December over 1000 metres.

Yendall gave the classy sprinter plenty of time to settle before producing him for his customary big finish to score in stylish fashion.

Clairvaux defeated Clinton McDonald’s Royal Rada and Mark Young’s Street Order in a time of 1:11.99 for the 1200 metre trip.

Ticket To Toorak found the lead in the same race as Clairvaix but failed to settle and his run is best forgotten.

Later in the day Taiyoo returned to something like his best with a comprehensive victory in the last race on the program, the Lacam Catering BM64 Handicap (1400m).

After racing wide without cover in the early stages Yendall allowed the striking son of Haradasun to settle just off the pace in striking distance of the leading pack.

In the straight Yendall gave the 4yo full rein where he ran to the lead inside the final 150 metres to score an impressive 1.5L victory over Neil Phillips galloper Nadia’s Magic and Pat Ryan’s Southern Alliance in a time of 1:24.39.

The win was Taiyoo’s third from eight starts and he has picked up $35,810 along the way.

ATB gallopers have been in good form of late with Change Course, Miss Adelaide and Falago all finishing second in the past week.

Check out our Racehorse Shares page and join us in racing your very own racehorse!