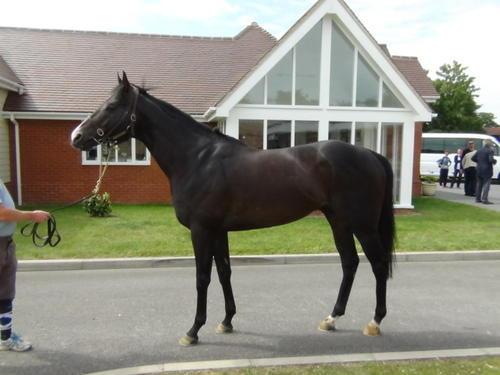 Australian Thoroughbred Bloodstock has been successful in securing our newest International recruit, a son of Cape Cross, Guest Of Honour.

In the United Kingdom for Royal Ascot, Darren and Liz Dance along with many ATB owners visited the Newmarket Stables of Marco Botti.  ATB were there to inspect our horses in Dandino, Kelinni, and  Tac de Boistron. Along with the recently purchased Seismos, and South African winning mare Counter Ridge who had just been released from a six month quarantine period due to strict South African regulations.

While there, Marco paraded many of his team for us to see. In the mix was an entire called Guest Of Honour. He had great presence when walking out of his box and had a real wow factor about him. Darren inspected him and photographed him. At the time Darren told Marco “he is a lovely horse but for me to buy him, he needs to win a Group race to ensure that he is qualified for Australia for the races we want to compete in.”

By the time Darren and Liz got back to Australia, Marco had left Darren a message to say that he had won a Group 2 impressively beating the ex-Australian Darley horse and Group One Caulfield Guineas winner Long John.

That said Darren gave some serious thought on whether to purchase him or not. ATB put the feelers out to evaluate the level of interest and it was high, so we began the process of purchasing him.

Guest Of Honour is a lightly raced five-year-old Group Two winner who is best on good to firm ground. He travels well in his races and has a good turn of foot with a Timeform rating of 115. He is an entire by Cape Cross out of the dam Risera (Royal Academy). With only Fourteen starts under his girth he has had 5 wins, 3 seconds and a third. Standing at 16.1hh he has a great walk and enjoys his work.

While on a working holiday, Jockey Craig Williams not only rode Dandino but he also teamed up with Guest Of Honour. Craig rode Guest of Honour up Warren Hill at Newmarket and said that he was “a lovely type who was a great mover and he felt powerful. He has a lovely temperament, a long stride and was clean winded.”

All going well, trainer Marco Botti will bring out Guest Of Honour for this year's Spring Carnival along with ATB's other Spring Carnival hopefuls. His program will include the Toorak Handicap and The Cox Plate.

Australian Thoroughbred Bloodstock along with Guest Of Honour’s new owners are extremely excited about this purchase and we cannot wait to see him on Aussie soil.