Lonhtime gets there just in time at Yarra Valley today 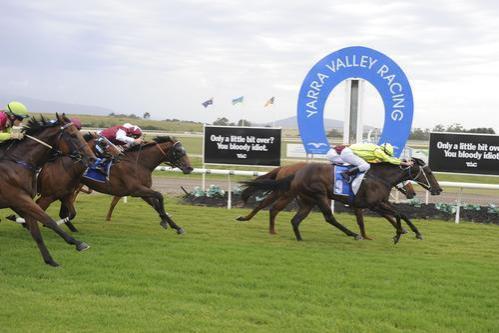 Lonhtime contested the Yarra Valley Grape Grazing 0-64 Handicap (1217m), the last race on the card, and the 4yo responded strongly under the urgings of Jason Benbow to run down the well backed second favourite Mighty Like in the shadows of the post.

Benbow was full of praise for the daughter of Lonhro following her impressive win, despite only getting there with a short head to spare.

“I still had a lap full of horse,” Benbow said.

“I thought there wouldn’t be as much speed and we would control the race and put pay to them, but it was a really good effort.”

“She probably added another string to her bow, and you know, sat off them and finished it off extremely well.”

Trained by Peter Moody at Caulfield and having her first start since winning over 1100 metres at Bendigo in May, the talented galloper looks set for a very good preparation judging by her fast finishing first-up effort today.

She has now had three starts for ATB, winning 2 races and finishing runner-up in the other, earning more than $39,000 along the way.

The form around Lonhtime’s first three starts is more than handy and she certainly looks up to city class.