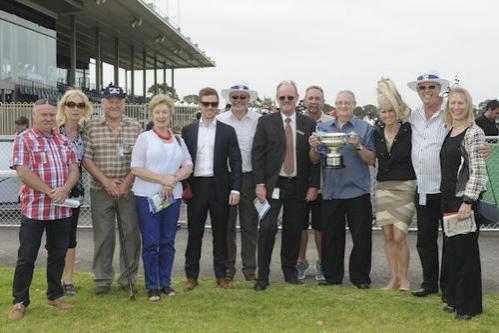 General Amour has made it two wins in two days for Australian Thoroughbred Bloodstock with a classy victory on Werribee this afternoon.

The General Nediym 4yo has been racing well without luck in his past few runs and he finally put it together from an inside draw to score an excellent 2.5L win in the Tobin Brothers Funerals 0-64 Handicap (1000m) on Werribee Cup day.

Trained at Forest Lodge in Ballarat by leading trainer Darren Weir, General Amour was always in the firing line thanks to an excellent on pace ride from in form hoop Dean Yendall.

Yendall was impressed with the way General Amour finished the race off when asked the question.

“We began well from the barrier and had the nice sit on them,” Yendall said.

“Obviously needed that bit of luck and I got it when I wanted it and he was very strong to the line.”

“I like the way he hit the line today it was full of merit.”

When Yendall pulled out the persuader General Amour exploded away in the final 200 metres to hit the line in stylish fashion.

“Obviously the shades has turned him on again and when I gave him one on the backside he knew it was business, ” Yendall said.

Another who was impressed was part owner Ken Colwell who was on hand to witness the overdue win.

“Great win and a great ride by Dean,” Colwell said.

“The horse has had its problems and fantastic training feat by Darren Weir.”

“Australian thoroughbred Bloodstock, you’ve got to get on board!”

That made it win number three from 14 starts for General Amour with earnings of more than $45,000 for his connections.

General Amour will gain plenty of confidence from that win and Darren Weir will place him to advantage again in coming weeks.

A city placegetter at Moonee Valley in March this year, the son of General Nediym may even make the trek to the city if he can reproduce today’s form.