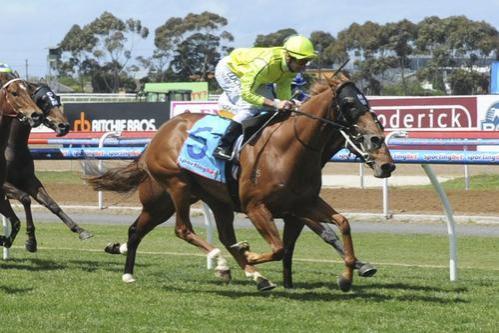 Smart Matthew Williams trained mare Choisance made it two wins from three starts this campaign for Australian Thoroughbred Bloodstock when she scored a terrific victory at Stawell today.

Having her 16th career start, the 4yo appreciated the firm conditions and was rated perfectly by Ms Lily Coombe to win the last race on the card, the Stawell Gold Mines BM64 Handicap (1300m).

Lily had Choisance perfectly placed in the run which allowed her to bring the daughter of Choisir into the race at just the right time to pounce on the leaders in the shadows of the post for a top win.

Choisance resumed with a strong victory at Geelong on Emirates Stakes day in November before she stormed home for a fast finishing second place at Hamilton on an unsuitable slow track at her next start.

The in form galloper is likely to head to town now according to ATB’s Darren Dance.

“It was a great win today and she was well ridden by Lily Coombe,” Dance said.

“This mare is in great order this preparation and is ready now to go to a race in Melbourne and she will be very competitive as she is so honest.”

Part owner Brian Johnson, who manages the Guns in the Sky syndicate, which includes son Adam Talbot, and friends Matt Foster and Nigel Bright, was excited by the mare’s fourth win today.

“She hit the line hard again for another strong win and has returned in super form,” Johnson said.

“All the credit must go to the Matty Williams team at Warrnambool who have done a wonderful job with her.”

“In her first campaign she won two races at good odds and was more than competitive as a 3yo against the older horses.”

“She doesn’t like wet tracks so Matty suggested we be patient with her and turn her out for the winter before bringing her back for the drier months over summer.”

“He was spot on and has produced her in outstanding shape for all three starts this time in.”

Particularly happy for fellow syndicate members and first-time owners Matt Foster & Nigel Bright, who may have their first city runner in the next couple of weeks, Johnson was glad to get them involved.

“It took a bit of persuading to get Matt & Nigel into the horse but they seen how well my horses were doing with ATB that they decided to get involved.“

“Now they have 3 winning photos on the wall, with one more to come after today, and now they want to get into more horses, much the same feeling my son and I experienced after racing our first horse with Darren & Liz.“

“It’s addictive and you can’t beat that feeling when your horse crosses the line first.”

“Every horse my son & I have raced with ATB have all made it to the race track and won, well all except one that couldn’t get out of its own way, but Darren replaced that horse with another one and it won at it’s second start for us.”

“Can’t get a much better endorsement than that for racing horses with ATB.”

Choisance has prizemoney earnings of $44,180 from 4 wins and one second placing from 16 career starts.

She will now be aimed at a midweek race in town or a Friday night meeting at Moonee Valley and will be hard to beat in her current vein of form.

In her 4 wins to date Choisance has been at good odds each time, especially on the TAB.