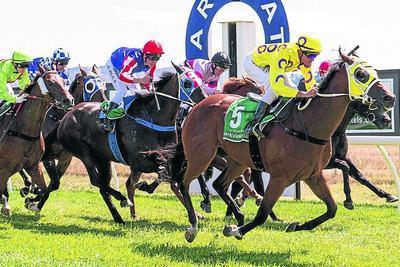 Racing Victoria (RV) has expressed its disappointment at the abandonment of today’s NMIT Ararat Park meeting after jockeys determined the track was unsafe for racing.

RV Executive General Manager – Infrastructure, Jamie McGuinness, said the Ararat Turf Club has been asked to explain the unsatisfactory preparation of the track in the lead up to today’s meeting.

McGuinness said RV would also review communication procedures to better understand why the issue that led to the abandonment was not addressed earlier.

“It’s unacceptable that we’ve lost today’s Ararat meeting and we’ve commenced discussions with the Club and our officials to review the circumstances that led to the abandonment,” RV Executive General Manager – Infrastructure, Jamie McGuinness, said.

“Our initial inquiries indicate there was an issue with the irrigation of the track which led to a section in the home straight being considerably wetter than the remainder of the surface.”

“Before the meeting commenced the stewards ordered the rail be moved out five metres in the home straight around a  wet section of the track however concerns remained about the suitability of the track for racing even after the rail was moved.

“Ultimately, horse and rider safety is paramount so the decision of the jockeys not to complete the meeting was accepted.”

The connections of each affected horse and the riders will be compensated under RV’s meeting abandonment policy.

In light of the abandonment, nominations have been extended for a series of meetings for those horses that missed out on competing at NMIT Ararat Park today.

Trainers have until 4pm Wednesday to nominate horses for Saturday’s country meetings at Stawell and Cranbourne (night) where they’ll be assessed as late entries for the purpose of balloting.

Horses affected by the abandonment can be nominated as original entries for Sunday’s TAB Werribee Cup and Benalla meetings as well as the Bairnsdale meeting on Monday up until 10am tomorrow.

Australian Thoroughbred Bloodstock had Host Me and General Amour engaged today and it is very disappointing for owners to have to go through this.