Imaging Makes An Impression At Sandown 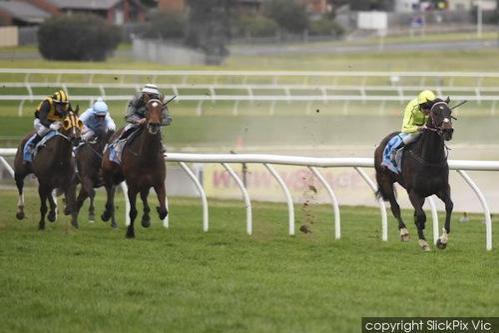 Trainer Darren Weir took Imaging to Sandown to contest the Race-Tech Australia Handicap over 1300m where he went into the $35,000 race as second favourite. Behind the gates favourite Belesron was scratched and omitted from the race.

Imaging was second emergency for the race, and luckily for his owners and trainer there were some scratchings and we gained a start. With Brad Rawiller on board and coming off an impressive last start the only problem that Weir saw was barrier one. With the field racing off the rail it would be a question how the race would unfold and what position Imaging would take in running.

Imaging flew out of the gates and Brad took up a lead position along the rail. However 200m into the race there was a fight for the lead and Brad had two in front of him and one to his side. Imaging began to over race badly and Brad did a fantastic job to keep him clipping heels from those in front.

Once around the turn for home, the leaders shifted out and Brad slipped up beside the rail and let Imaging go. Imaging passed the leaders in a flash and trounced the field by 3.3L.

It was an impressive win for the Ready's Image gelding who in his first preparation has had 5 starts for two wins and two seconds with prize money of over $37,000.

If you are interested in racing with ATB please do not hesitate to call Darren Dance on 0417 616 666. To see our other racehorses on offer head to our "For Sale" page or click on the following http://atracehorses.com.au/horses-available