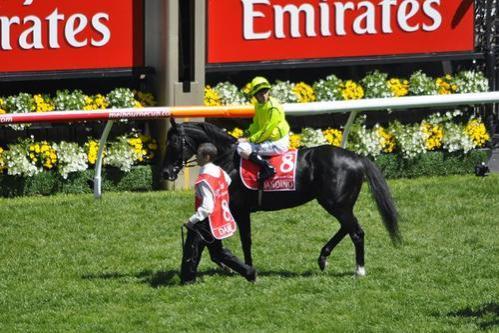 Australian Thoroughbred Bloodstock’s Darren Dance has advised that Dandino has been scratched from the 2013 Hong Kong Vase this morning due to injury.

Dandino was found to have to filling in the off foreleg but scans show no tears or holes which is great news for the horse and connections.

No chances will be taken with Dandino and he will jet home to Newmarket on Tuesday before being aimed towards the Dubai World Cup carnival in March and the Royal Ascot carnival again in June.

A number of ATB owners, including Darren & Liz Dance, had made their way over to see the ‘black beast’ race against many of the best stayers in the world and will be disappointed by this morning’s news, but all agree that the horse’s best interests are what matters most.

Our Facebook page had the following comments shortly after which pretty well sums up the feelings at the moment.

Donna Love – “Heart breaking news but definitely the best and only thing to do in the circumstances, safe trip home everyone including Dandino, speedy recovery“

All going well Dandino will be back better than ever following a very well deserved spell.