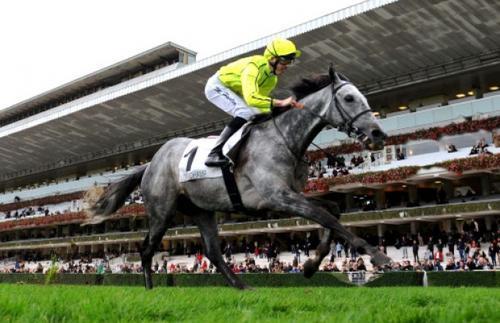 Australian Thoroughbred Bloodstock’s UK based stayer Tac De Boistron proved a class above his rivals overnight scoring a resounding victory in the €250,000 Group 1 Prix Royal Oak at Longchamp in France.

Trained by Marco Botti at Newmarket in England and ridden a treat by jockey Martin Harley, the six-year-old continued his outstanding form under the care of ATB’s Italian-born trainer and revelled in the soft track conditions.

“I was pleased he showed a nice turn of foot on this ground, as it’s very testing,” Botti said.

“I think he’s finished for the year. There’s nothing left for him and we’ll probably put him away.”

“I’ll speak to the owners and hopefully they will keep him for next year.”

“There are plenty of good races over two miles for him and he’s a horse that has probably improved with age. He is very sound, straightforward and is holding his form.”

At his most recent start Tac De Boistron finished a brave second behind Altano in the Prix du Cadran over 4000 metres on Arc day at the same track, but he was favoured this time by the drop back in distance and proved much too good for this field.

The son of Take Risks was blocked for a run in the straight but it mattered little as Harley went around his rivals in the straight and scorched to the lead for a well deserved victory.

“The horse was never happy over here and we were unable to find any suitable wet tracks,” Dance said.

“So we made the decision to send him back to the UK where he can go all over Europe in search of slow or heavy conditions.”

“Marco is a fantastic trainer and has produced the horse four times now for two wins, a second and a third.”

“An outstanding result for all of our owners and shows we found the right horse, but we had to find the right conditions for him.”

“Now he is a Group 1 winner at Longchamp and we have some very excited and happy owners who might be late to work tomorrow with the race being on here at 1.40am in the morning.”

Tac De Boistron is likely to head to the spelling paddock now and Darren Dance said the horse is on the market after winning the Group 1 Prix Royal Oak overnight.