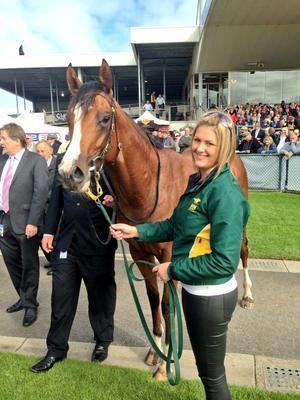 Day three at the Warrnambool Carnival saw Reigning Meteor contest and win the Simons Waterfront Handicap ran over a distance of 1200m. Trained by local Matthew Williams and ridden by Dean Yendall the Northern Meteor colt started a tote favourite of $2.30.

From barrier 8 Reigning Meteor pinged the gates and settled half a length outside the leader Red Casino. Coming around the bend Dean steered the colt to the outside of the track while Red Casino chose to stay on the inside. It was battle up the straight with both horses going stride for stride. It was a photo finish. The TVN camera man thought Red Casino had won the race, and the numbers were put up prematurely, however after the photo finish was produced the judge gave it to Reigning Meteor! The owners erupted with a deafening cheer and it was a fantastic moment that was thoroughly enjoyed by everyone!

Reigning Meteor has given his owners some great times with only three starts under his girth he has now won two races and a second. We are very excited about what's in store for this boy!

If you are interested please do not hesitate to call Darren Dance on 0417 616 666. To see our other yearlings on offer head to our "For Sale" page or click on the following http://atracehorses.com.au/horses-available