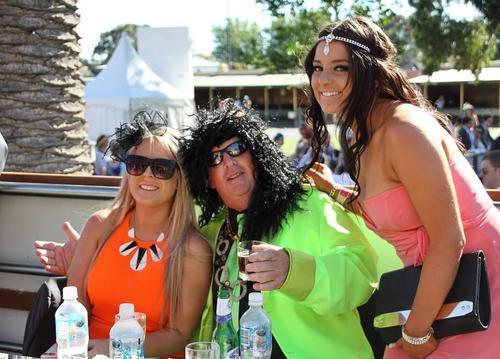 ATB’s Fluro Man certainly enjoyed himself in the Dandino Bar at Caulfield yesterday and has decided to stay on in Australia to take in Melbourne Cup week for the first time.

A native of Chicago in the United States, Fluro man was so enamoured with the win of Dandino in the 2013 American St Leger at Arlington that he donned the fluro colours of ATB right there and then and vowed to follow him to Australia during his spring campaign.

He arrived in Australia earlier this month and found his way to Darren & Liz Dance’s Manningtree Park property in Ballan and has been partying ever since.

When asked what it was about Dandino that made him come all this way, he had this to say.

“Someone once said to me, let’s get ridiculous, and I said, let’s get a racehorse,” said Fluro man.

“I seen the black beast Dandino win the American St Leger and I was hooked.”

“I gave Darren ‘Double D’ Dance a call right then and there and became a racehorse owner that very day.”

“Now I’m here in Australia in the Dandino Bar with a runner in the Caulfield Cup.”

“I’m a racehorse owner and I’m living the dream thanks to Double D & Lizzy D at ATB.”

“Everyone should start racing the ATB way. You know you want to!“

Fluro Man has not been seen or heard since Caulfield Cup day and ATB’s Darren Dance is hopeful he will reappear during Melbourne Cup week.

“When he knocked on our door at Manningtree Park we couldn’t believe it,” said Dance.

“Look out if Dandino wins the Melbourne Cup.”