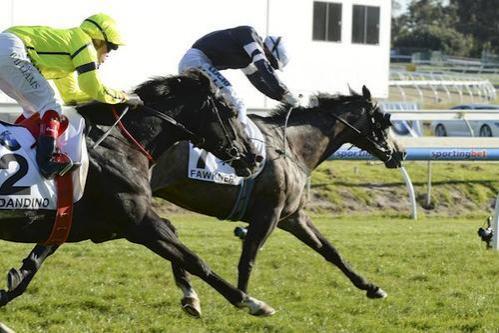 Ridden by Craig Williams and jumping from barrier 16, the son of Dansili had a large contingent of ATB owners ecstatic after his second placing in Australia’s second biggest staying race.

“If you had swapped barrier draws you would have swapped the result, no doubt,” said rider Craig Williams.

ATB owner Darren Dance who syndicated Dandino earlier this year was excited for his owners and looking forward to Dandino contesting the Melbourne Cup.

“I think we all feel like we’ve won the race,” said Dance.

“When we buy these horses we put in a lot of money and a lot of work. I couldn’t be happier and I suppose we can go to Flemington now without a penalty.”

“We just wanted him to run well for the owners because they’re wonderful people and he did.”

ATB hosted more than one hundred of their owners in the Dandino Bar at Caulfield to enjoy the occasion and a great time was had by all.

A number of owners come from interstate to enjoy the day including prominent ATB owner Phil Brittain, who couldn’t wipe the smile of his face.

“Everybody dreams of winning a Caulfield Cup or Melbourne Cup,” said Phill.

“Last year I was involved in the Jakkalberry ride that saw him run 3rd in a Melbourne Cup.”

“Now I have a Caulfield Cup placegetter. It doesn’t get much better than that as an owner.“

Dandino now heads to the Melbourne Cup on the first Tuesday in November and so do a bunch of very excited owners at Australian Thoroughbred Bloodstock.