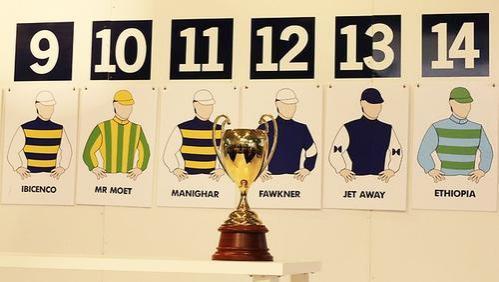 Dandino part owner John Richards was given the responsibility to draw the marble that would decide Dandino’s fate and turned over number 19 for the Marco Botti trained galloper.

After scratchings the son of Dansili is likely to jump from gate 16 and jockey Craig Williams was philosophical shortly after the draw.

“Of course you would like a more favourable draw, but more importantly, the horse is in great order and we’ll assess it from there,” Williams said.

Dandino has settled in extremely well at the Werribee Quarantine Centre following his arrival from the UK on Grand Final day with Marco Botti Head Man Paul Francis.

Francis, who was at the barrier draw today, thought the horse could overcome his wide gate at Caulfielf.

“He has thrived in Australia and seems to be enjoying himself much more than home,” Francis said.

“He had a leisurely gallop this morning in preparation for Saturday’s race and the couldn’t be any better going into the Caulfield Cup.”

“The wide barrier is a concern but Craig won the race from a wide gate last year and knows what to do.”

ATB owner Darren Dance would have preferred a better gate but said it is what it is.

“He hasn’t missed a beat since arriving at Werribee and his recovery has been outstanding,” said Dance.

“Watching him work this week has given us a great deal of confidence he is in with a great chance on Saturday and we have a great jockey riding in Craig Williams who will give the horse every chance from the wide gate.”

“It would be an honour to be a part of history if Craig can win his third Caulfield Cup in succession  and do it riding one of our horses.”

ATB’s Darren & Liz Dance will be hosting more than 100 owners in the Dandino Bar at Caulfield on Saturday.

Earlier in the day ATB have Platelet & Lonhspresso racing at Caulfield for the Darren Weir stable with ben Melham to ride both gallopers.