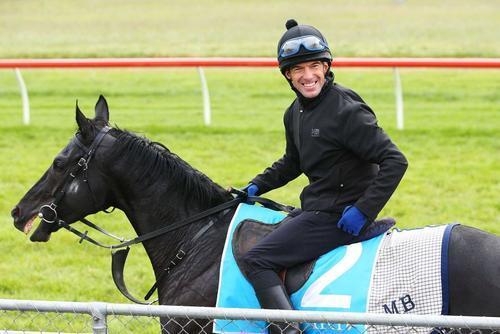 It didn’t take long for Marco Botti Head Man Paul Francis to accept an offer to travel halfway around the world to accompany stable star Dandino during his spring racing campaign in Melbourne.

A quick phone call to his girlfriend of 14 years for approval and the wheels were set in motion for the very likeable Englishman.

“It’s a wonderful opportunity for me and to have the support of my girlfriend makes it that much easier,” Francis said.

“I don’t know much about computers, so she set me up with Skype and showed me how to use the internet to keep in touch.”

“I’m getting there, but it’s not easy,” he said, with a look of bemusement.

Francis arrived with the son of Dansili on AFL Grand Final day late last month and has been overseeing the spring preparation of the Marco Botti trained stayer since his arrival in Australia.

He is very happy with how the horse has handled the long trip from the UK.

“He is thriving here compared to home,” Francis said.

“At home he can get a little lazy at times but he is really enjoying getting out to gallop on the Werribee track and is looking super.”

“The horse looks the best I have seen him and another couple of gallops will have him spot on for the Caulfield Cup next week.”

An experience horseman, Paul was fortunate enough to take care of 1992 Epsom Derby winner Dr Devious and was reluctant to compare the two gallopers.

“Dr Devious was a three-year-old younger galloper and Dandino is a rising seven-year-old and it is hard to compare the two.”

“What I will say about Dandino is he has a high cruising speed and takes things in his stride.”

“His recovery from the long trip has been amazing and everything has gone according to plan since arriving here.”

Paul has worked for leading trainers Ian Balding, Barry Hills and Mr Peter Chapple-Hyam and joined the Marco Botti stables as Head Man in 2011, after a stint in the same role for trainer David Elsworth.

Australian Thoroughbred Bloodstock’s international stayer Dandino could not be in better hands until trainer Marco Botti arrives in Australia.

Dandino was purchased and syndicated earlier this year by Darren Dance for Australian Thoroughbred Bloodstock to contest the 2013 Caulfield Cup & 2013 Melbourne Cup.

He is currently on the fourth line of betting for the Caulfield Cup on Saturday week and has been trained specifically for that race by Marco Botti.

Dandino firmed noticeably in Caulfield Cup betting after top jockey Craig Williams was announced as his rider for the $2.500,000 Group 1 race two days ago.

The 2013 Caulfield Cup will take place on Saturday 19th October 2013 at Caulfield racecourse in Melbourne.