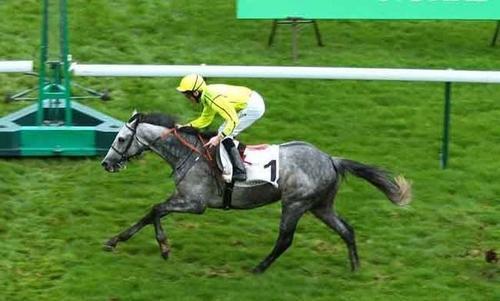 Purchased and syndicated by ATB’s Darren Dance to contest the 2012 Melbourne Cup under the guidance of Cranbourne trainer Mick Kent, the son of Take Risks was never happy on Australia’s firmer tracks and finished second last in the ‘race that stops a nation’.

In a brave but smart move, Darren Dance decided to return the horse back to the UK in search of his preferred tracks and elected to place him with trainer Marco Botti at Newmarket.

Marco already trains Jakkalberry, Dandino & Crackerjack King for ATB and has had great success in his short time with Australian Thoroughbred Bloodstock, winning the American St Leger for the past two years (Jakkalberry & Dandino) and taking Jakkalberry to a third place in last year’s Melbourne Cup.

The 6yo grey gelding debuted for the Botti stable with a third place in the Listed March Stakes (2800m) at Goodwood last before heading to Chester for a decisive win.

He proved much too good for his rivals, running away in the home straight to score by a huge eight length margin.

Tac De Boistron was ridden by Martin Harley and the slow conditions were certainly in his favour.

He will now likely head to France on October 5th to compete at Longchamp on Arc Day and will be even fitter for his next outing.