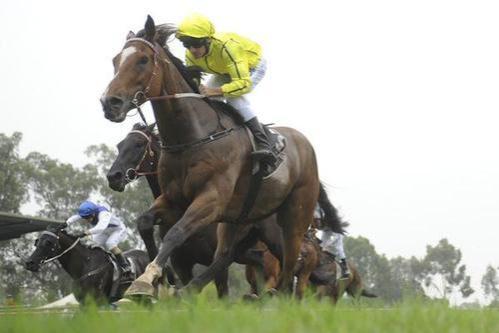 ATB’s Edge Of War produced an amazing last to first finish to score an exciting victory at Seymour this afternoon much to the delight of his patient owners.

The 5yo son of Racer’s Edge has taken a little time to find his feet this preparation but he left his backers in no doubt that he had returned to something like his best with a scintillating win.

Managing part owner and ATB head honcho Darren Dance expected the horse to run well, but thought he would be better for the run and was pleasantly surprised in the manner of his victory.

“I can count on one hand the number of times that our horses exceed expectations each year and shock me,” Dance said, “and today was one of them, the horse was brilliant.”

“He was out the back early as the speed was on and then a game ride and a big effort saw the horse win in a dominant fashion.”

“This horse has ability and can sprint very well fresh, and he has had a lot of back luck.”

“Hopefully that is behind him now and we will have a good run with him this preparation.”

Trained by Darren Weir at Ballarat and ridden to perfection by jockey Brad Rawiller, Edge Of War settled at the rear of the field until they entered the straight, where Brad was rewarded for his patient ride as the horse made every post a winner in the final 400 metres to record his second victory from eight career starts.

Edge Of War’s exciting win made it two winners in three days for the Australian Thoroughbred Bloodstock, Darren Weir & Brad Rawiller combination, following the win of Miss Adelaide at Ararat two days ago.

The bay gelding is likely to head to Sandown or Hamilton later in the month over 1200 metres and will be hard to beat in anything he contests judging by the strenght of his win today.