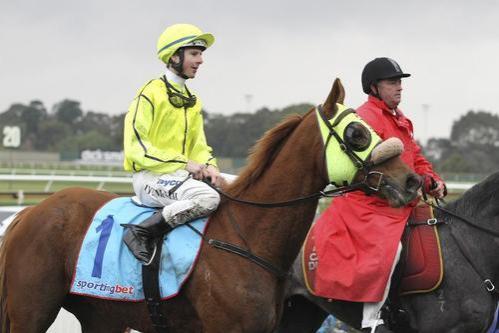 ATB’s Darren & Liz Dance may be jetting off to Hong Kong tomorrow to see their UK based stayer Dandino contest the 2013 Hong Kong Vase at Sha Tin on Sunday, but back home it will be business as usual for Australian Thoroughbred Bloodstock with runners at Caulfield, Darwin & Terang over the weekend.

First cab off the rank is the Matthew Williams trained Luckyi’mbarefoot in Race 7 at Caulfield on Saturday 7th December 2013 in the Blue Moon Racing Handicap (2000m) at 4.50pm.

Apprentice Jye McNeil (a3) takes the ride on the Undoubtedly gelding who will jump from barrier 4 with only 57 kilograms after McNeil’s 3 kilo claim.

On the same day up north we have Magnus Belle & Our Rhomeo going around for the Jason Manning stable in Darwin with Vanessa Arnott aboard both gallopers.

Magnus Belle will step out in Race 1 at Darwin in the HB Group TROBIS Handicap (1000m) at 3.32pm local time.

After doing all of her racing in Victoria previously, the 4yo Magnus mare makes her Darwin debut for the Manning stable and will jump from barrier 8 on Saturday.

Our Rhomeo, having his second run in Darwin, has accepted for Race 5 in the Primo Cardona Class B Handicap (1200) at 6.04pm local time and has the coveted number one alley.

The following day Dandino will jump from gate 5 in the 2013 Hong Kong Vase at Sha Tin on Sunday 8th December 2013.

Melbourne Cup winning jockey Damien Oliver will ride Dandino and the son of Dansili steps out in Race 4 on the 2013 Hong Kong International Race Day card at 2.00pm local time.

A big day for ATB on Monday 9th December 2013 with 4 runners at Terang, including Change Course, Snitzel Rose & Choiciti from the Matthew Williams stable and Chilukki from the Darren Weir yard.

Change Course is the first to go around in the Bonners Transport Plate (1200m) which is Race 1 at 1.00pm.

She has drawn very nicely in barrier one and leading hoop Dean Yendall takes the ride.

Classy filly Snitzel Rose is in Race 2 at Terang in the Sungold Milk 3Y0 Plate (1000m) at 1.35pm and apprentice Thomas Sadler will ride from number 10 barrier.

In Race 3 we have Chilukki jumping from barrier 8 in the D & J Twaddle Catering Plate (1000m) at 2.10pm with Dean Yendall in the saddle.

Final ATB runner for the weekend is Choiciti who tackles Race 7 at 4.40pm in the Mahogany Computers Handicap (1200m). The Choisir mare has barrier 6 and the services of Dean Yendall and will be hard to beat.

See below for all our weekend runners in a nutshell and click any meeting link for latest odds.

Host me & General Amour race at Ararat on Tuesday and more details can be found here.

Make sure you have a Betfair account to take advantage of their 20% Owners Bonus whenever your ATB horse wins!