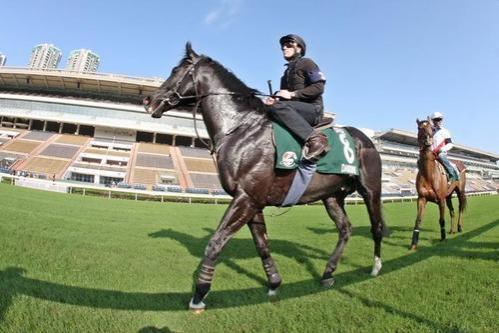 Australian Thoroughbred Bloodstock’s Dandino will jump from gate 5 in the Hong Kong Vase at Sha Tin on Sunday.

After a luckless spring carnival in Melbourne where he finished runner-up in the Caulfield Cup and fifth in the Melbourne Cup, the son of Dansili has fared well at this morning’s Hong Kong Vase barrier draw and will be given every chance by champion Australian jockey Damien Oliver.

The horse has settled into the Hong Kong way of life in great style according to his travelling companion Paul Francis.

“He travelled across with no problems at all,” Paul said.

“If anything, he looks better now than he did in Melbourne.”

“He has worked sensationally this week and wouldn’t have blown a candle out after each gallop.”

Paul was given the important barrier draw task for the Hong Kong Vase and was a relieved man after drawing barrier 5 for the Marco Botti trained stayer.

“I was certainly feeling the pressure at the barrier draw and was very happy to see the number 5 come out,” Paul said.

A strong field has assembled for the 2013 Hong Kong Vase including Dunaden & Red Cadeaux, who have won the race for the past two years.

Favourite for the race is classy English mare The Fugue who dominates betting for the Vase and as much as $11 is available for Dandino in latest markets.

Dandino has a great record at the 2400m distance, with 4 wins and eight placings from 17 starts to date, and he should be very hard to beat on Sunday.