Dandino takes it all in his stride at Werribee Quarantine Centre 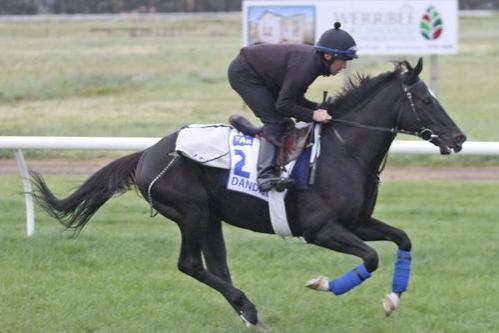 Australian Thoroughbred Bloodstock’s Darren Dance attended the Werribee Quarantine centre earlier this week to see Dandino warm up, work on the track and then cool down.

Dandino appears to haves settled in well in his new surroundings and is eating and drinking as normal.

ATB’s Darren Dance was most impressed with the horse’s condition after his first few days at the quarantine centre.

“He looks to be in super order and everyone is happy with him at this stage,” said Dance.

“Our Vet, Dr Andrew Cust, who is looking after him in Australia, reported this morning that he is very settled and his temperature is normal.”

“Everything is going to plan at this stage and we couldn’t be happier with the horse.”

Paul Francis, who accompanied Dandino to Australia, said that the horse is bright and well and is right on track for the Caulfield cup.

Darren Dance and a number of ATB owners are heading over to Paris this weekend to watch Tac De Boistron race at Longchamp in France on Sunday and he will be catching up with Dandino’s trainer Marco Botti over there to lock in riders for both cups.

It is likely that and Australian rider will be aboard the son of Dansili for the Caulfield Cup and Ryan Moore for the Melbourne Cup.

Darren hopes to announce a jockey for Dandino next Wednesday.