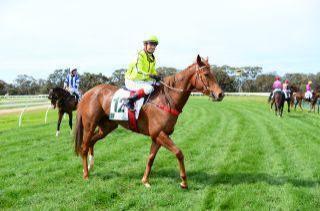 Promising Australian Thoroughbred Bloodstock 4yo Stylish Lily scored a most impressive victory at Warracknabeal today when having just her second race start.

Trained by Darren Weir at Ballarat, the daughter of Choisir  finished runner-up on debut at Donald last month in a promising first-up performance.

She followed on from that run with a strong victory in the Winmpak Maiden Plate (1000m) where jockey Dean Yendall had her perfectly placed to finish over the top of them in the straight.

After taking a while to get to the races due to a number of problems, Stylish Lily is now repaying the faith of her owners and showing plenty of promise on the race track.

ATB’s Darren Dance was impressed with the talented mare’s win.

“I liked the way she did it,” said Dance. “She was wide early, under pressure to make a run at them, then she let down in the straight and mowed them down.”

“She has the makings of a pretty good mare l think.”

Stylish Lily looks capable of winning better races and her owners should have plenty of fun along the way.