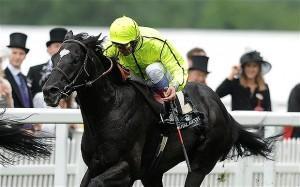 Dandino joined ATB’s UK based trainer Botti earlier this year after being purchased and syndicated by ATB’s Daren Dance.

In three starts for Marco and ATB the son of Dansili has finished runner-up in both the Group 2 Jockey Club Stakes at Newmarket and the Group 2 Hardwicke Stakes at Royal Ascot before a tough victory the American St Leger at Arlington Park in Chicago.

“He is doing very well, I’m very happy with him and he will enter quarantine to go to Australia in the next ten days,” Botti said.

“We are looking forward to going to Australia with him and he will probably run in the Caulfield Cup, if all goes well, before going to the Melbourne Cup.”

“We are hoping that Ryan will keep the ride on him, but obviously it is hard to pin him down now for a race in early November, so we’ll just have to see.”

“So far this year everything has gone to plan. The American St Leger was a race we had in our plan as it was worth very good prize money and also it would not affect his handicap mark for the Melbourne Cup.”

“If it was a Group Two or something, he would probably have carried another couple of kilos in the Melbourne Cup, which would have compromised his chance.”

Dandino is one of 135 early nominations for the 2013 Melbourne Cup, including 28 international gallopers.

ATB’s Dandino is $26 in latest 2013 Melbourne Cup odds and is certainly worth an early bet!