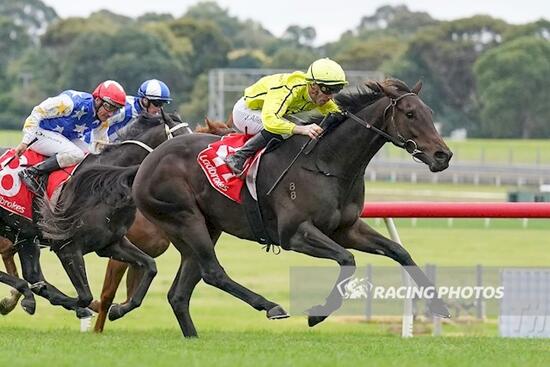 An Easter Monday win by Detonator Jack has catapulted the son of the ill-fated Jakkalberry into South Australian Derby favoritism.

At only his third start, the 3YO kept his unblemished record intact with a strong win in the Ladbrokes Mega Multi BM78 Handicap over 2100m at Sandown.

The Ciaron Maher & David Eustace trained gelding's next run will be in South Australia's classic three year old race on May 7th where he is now the $3.60 favourite.

Gaining a run as an emergency on Monday, John Allen settled worse than midfield on the well-backed $2.50 favourite before tracking into the race prior to the home turn.

Despite a few anxious moments waiting for a run, the gap opened and the race was over courtesy of a great turn of foot.

Allen who has committed to the Derby ride, commented the gelding was too good for his opposition despite not relishing the shifting surface around the home turn.

The current connection reignites the great allegiance Darren & Liz Dance have had with Jakkalberry who finished an unlucky third in the 2012 Melbourne Cup behind Green Moon when wearing the ATB colours.

Hopefully a SA Derby victory can be the beginning of a journey that provides the fluro colours with another Melbourne Cup runner - they dare to dream!

The win makes it five winners in four weeks for the ATB team, wins coming through homebreds or well-connected horses.

We have the opportunity for you to get involved through ownership in another homebred by Crackerjack King to be trained by Tom Dabernig at Warrnambool.