'EAGLE' SET TO LAND AT MAY CARNIVAL 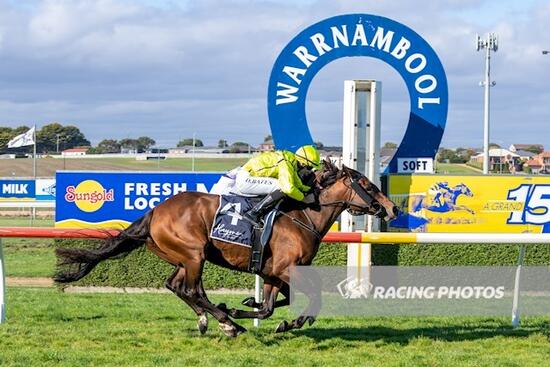 A win at Warrnambool last Friday could turn into something bigger and better at the same track come the first week in May.

Starting a well-supported $3.10 favourite, Eagles And Pins survived a protest to make it two wins from three starts this preparation.

The Paul Preusker trained mare was able to collar Miss Charlee Lyn late for a narrow win in the 2350m Whalers Hotel BM58 Handicap, before having to wait for the official result in the stewards room.

After a nervous protest wait, in which jockey Declan Bates described as "they can have a look, but they've got no chance", owners then learned that a target race for the daughter of Free Eagle is during the infamous May Carnival over the same trip.

Aiming at a race during the carnival is a long way forward from where this mare was two years ago, even four months ago and most of the credit goes to Preusker and his team.

Plenty of owner patience is now starting to pay dividends, something Preusker acknowledged post race with Matt Stewart from Racing.com.

"I always knew there was something with her, so congratulations to the owners for staying patient."

Asked whether he was concerned about the late interference, he answered in his usual measured way.

"Always concerns, but I think she was going strong enough, hopefully it goes my way."

In what was a messy, stop start race, Bates was very complimentary of the 4YO in his post race analysis to the owners.

"I've asked a lot of her, I've asked her to commence a really long run, that's why late, that last 50 she was knocking up a touch, but she was always doing enough."

He also feels there are more wins to come.

"That was a good effort by her, so she is probably capable of a grade or two better than this to you know."

Bates also dropped his whip during the frenetic finish, something Darren Dance highlighted.

"I think I got her to top speed by the time I lost it, luckily, um yes, not ideal."