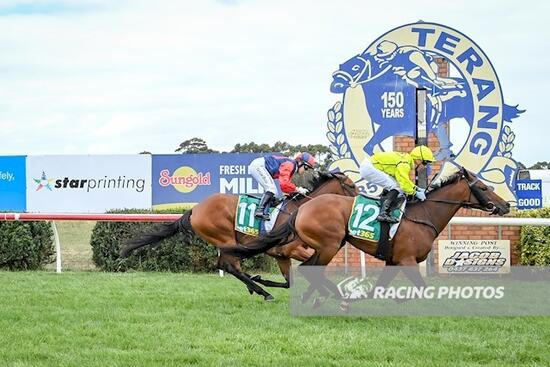 Eagles And Pins delivered a red-letter day that the majority of her owners would have doubted many times during her four start career.

The Paul Preusker trained daughter of Free Eagle (x Piedini) has had to deal with numerous issues, but they were all pushed aside when she won the South West Dairy Services Maiden Plate over 1600m at Terang on Monday.

After a first-up third on a heavy track at Hamilton over 1600m, Preusker applied winkers and stayed at the trip rather than run at Stawell over 2000m the following day.

His bold decision was vindicated with the help of a lovely ride by Dean Holland.

After jumping well, the mare landed in the one out position before easing into the clear just as they straightened for home on the big spacous track.

In the manner of a nice stayer in the making, the homebred took a while to hit her straps before powering through the line for a convincing victory.

Preusker and his team have done a fantastic job with the rising 5YO, plenty of walking and swimming built a strong fitness base after she suffered from shin soreness at the end of her initial race preparation.

It's a great result for all concerned with the promise of more to come, especially as she steps out to 2000m and beyond.

The win was the beginning of a great day for ATB's breeding arm Esker Lodge.

Danny Sparkle (Scissor Kick x Penny Banger) trained by Mitch Freedman was also able to record her first win with a strong effort in the Provico Australia 4YO+ Maiden Plate over 1200m.

Purchased by Wylie Dalziel, ATB's Darren & Liz Dance along with breeding clients stayed in the ownership to make it a day of double joy.

Named after the late Danny Frawley, his wife Anita along with other family members are part of the ownership group.

If you would like a share in an Australian Thoroughbred Bloodstock homebred you can click here and join us in racing a Crackerjack King colt with Tom Dabernig for less than $2000.