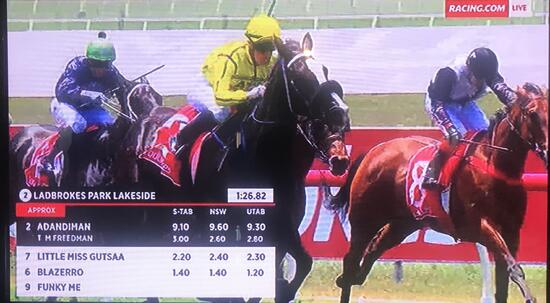 Trained by Mitch Freedman, the promising galloper was rated perfectly in the lead by apprentice jockey Tahlia Hope who is on loan to the stable.

Having her first race ride on Adandiman, it was also her first win for the stable.

Second-up at only his fifth race start, he showed great tactical speed, a good turn of foot and plenty of grit when tackled late in the race.

It was his second career win after a successful debut over the same trip at Geelong in January.

Freedman has always had a good opinion of him even before his debut, today franking those thoughts once again.

It has been a very good training effort, one of patience and very good placement.

Bred by Darren & Liz Dance and clients, this win is very significant for Dandino who also raced in the ATB colours.

While he has eight wins from seven individual winners, today's city success is the little kick along his stud career needs.

A stayer with a brilliant turn of foot, he was stakes placed 18 times (wins 2 x G3, 1 x G2) from 37 attempts, including a brave second in the G1 Caulfield Cup.

A son of world-acclaimed sire Dansili, he stands at Bombora Downs under principal Christoph Bruechert for $5500.

Come race with ATB, our next yearling by Crackerjack King will be calling for 'Expressions Of Interest' later this week.