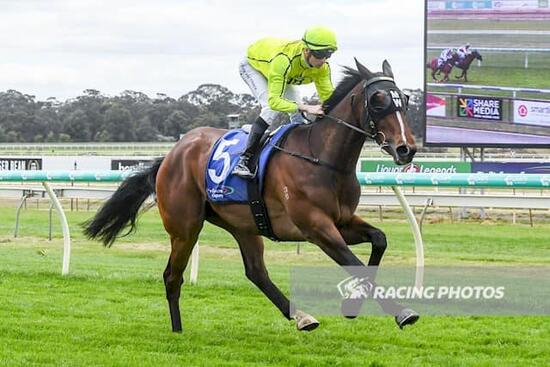 The beautifully named Oenology (a study of wine) out of former ATB broodmare More Bubbly is maturing like a good wine.

After his Bendigo maiden success on the weekend we continue to get a taste of what he has to offer.

His continued rise this preparation has been monumental.

Formerly bred for the sales (x Hinchinbrook), the now 3YO gelding failed a scope with a throat ailment as a weanling.

Darren brought him back to the farm, and along with the breeders hatched a plan to race him.

Syndicating him was a risk, so the breeders decided to perform the throat surgery and give him a couple of preparations to try glean if he had any ability.

A gelding operation also stripped back any further interruptions once he was in training.

After his first preparation, he returned to the farm as a big raw proposition, no one any the wiser as to his future.

Another spell, then he returned to Matthew Williams and after another slow start, the big boy finally made it to the trials.

A first trial was a bowl around giving him a taste of what was to come, not much expected, and to be fair not much learnt.

At his next trial he ran home well for second, giving hope he may win a race - somewhere!

After he won his third trial, it was time for the races - momentum was gathering nice pace.

Matthew found a race at Donald for his debut, but wise heads knew that trial form and race form can be contrasting, therefore no expectations were put on the big fella.

Again he surprised us with a flashing lights second placing, flying home from the back of the field over 1384m.

Zac Spain once again joined forces with the gelding for another second placing at Geelong, again flashing late to just fail.

He was looking to be above average, but a win was needed to confirm all our thoughts.

All the planets finally aligned at Bendigo last weekend.

Out to 1600m on a big track with a low barrier draw, the race panned out as we hoped, the pairing of Spain & Oenology running out well-deserving and easy four length winners.

This result was also a great compliment to the fantastic work done by Matthew and his team.

It was a win that had Matthew talking VRC Derby, but that race was going to come along too quickly.

Matthew has found him a hard horse to rate, he is very much uptapped.

The Listed 1800m TAB Trophy 3YO Handicap on Melbourne Cup Day is his next target.

Vow And Declare won this race the year before he won our greatest handicap race.

Racing is about dreams, something Oenology would not have been part of less than two months ago.

With him, it was about hope not dreams!

Like a good wine, let's hope the maturing continues and that the finished product continues to brew away.

We have three 5% shares remaining in another Darren & Liz Dance homebred by Tosen Stardom to be trained by Mitch Freedman.

Click here to view his sales page which includes his pedigree page.