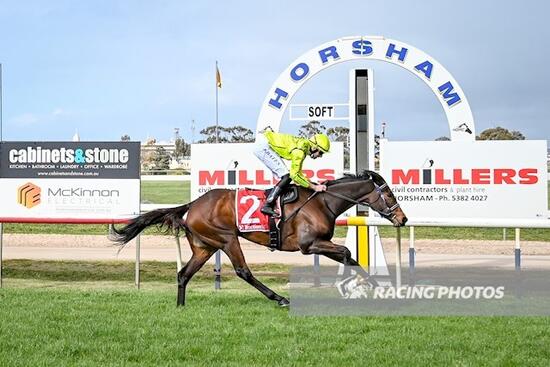 Pat Ryan Jnr provided ATB owners with a double at Horsham on Monday.

Relatively new to the our training ranks, the Wangoom based trainer has served up some great results with our 'tried' horses during the past couple of seasons.

Yesterday once again showcased his skills with Black Mirror & Madam Mischief both winning after commencing their careers with other trainers.

Black Mirror was an Inglis Online Sale purchase having formerly being trained by Ray Besanko.

Arriving as a feisty five start Maiden earlier in the year, the 5YO daughter of So You Think recorded her second win under Pat's care.

From eight starts in ATB colours, she has only failed to weigh-in once, her consistency a feature as she continues to improve.

After a Coleraine maiden win over 1300m, Ryan has gradually stepped her out in distance with yesterday's 1800m BM64 win hopefully a sign of better results to come.

Leading all the way under a brilliant Declan Bates ride, she easily accounted for the previously city-placed odds-on favourite, Aquileon.

That form line looks strong and given her next two runs could potentially be at Moonee Valley over 2040m, it gives her owners plenty of hope for a city win that will set her up as a broodmare post racing.

Madam Mischief fought back strongly in the 1400m BM58 to make it a memorable day for Ryan.

After leading, the 4YO daughter of Turffontein looked destined to be over-taken in the home straight by eventual runner-up Polina.

But with Mikaela Lawrence riding hard, she got off the canvas to win, albeit narrowly.

In an all female finish, Mikaela would have been thrilled to win in a tight finish against childhood idol, Linda Meech.

It was her second win on the mare.

Out to 1400m for the only the second time, Ryan is now hopeful the mare may even appreciate a little further in trip.

With that in mind a BM64 country series race over 1600m at Murtoa could be her next assignment.

Both mares first raced for Ryan in January this year and have since netted owners just under $50,000 each with two wins and a handful of placings.

'Mares in form' is an old racing adage, let's hope that means more wins are in store for both these girls!

Plenty of frustration through numerous placings in recent months was soon forgotten by our affable trainer.

We certainly knew Pat was happy!

Among a flurry of post race text messages, Pat was quick to point out the stable that finished second in both races - Maher & Eustace!

Join us at ATB, we have racehorse shares to suit all budgets and more importantly you can join a big family of fun-loving racing enthusiasts.

Click here to check our sales page, we also have a Dandino yearling with Symon Wilde for less than $1000 a share.