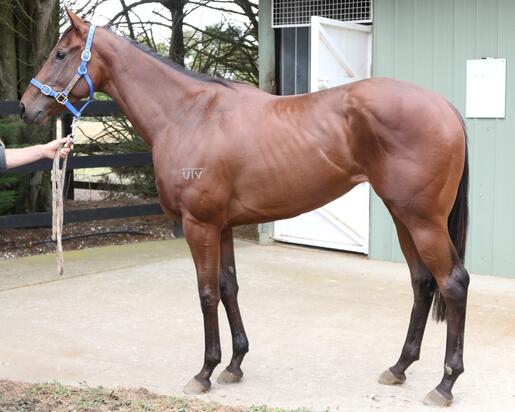 A Maiden victory at Narrandera doesn't normally extend to bigger riches on the racetrack.

But for well-related 3YO filly Sixtyfourth Street, her thirteenth start and subsequent win on July 18th was perfect timing for her pending career in the breeding barn.

The filly has an appointment with Newgate stallion, North Pacific next month, therefore the win added to the genetic value of being a full sister to Group One winning sprinter Elite Street.

Elite Street won the 2020 G1 Winterbottom at his eighth start and as a rising 5YO still has plenty of racetrack success to come.

Darren & Liz Dance were able to secure Sixtyfourth Street on the back of modest racetrack performances in Western Australia.

She looked a lovely addition to the 30 plus broodmares at Manningtree Park, but one box needed to be ticked.

With limited time remaining before the breeding season, strategic placement was needed to give her a chance of adding a win to her portfolio.

Warrnambool based trainer Patrick Ryan, did all but win a race with the filly, his trips across the border to South Australian venues netting two placings. But following a quick back-up and a wet track at the Warrnambool May carnival her preparation ended and a freshen up was needed.

It gave Darren a chance to take stock, knowing Victorian racing was strong and we were in for a long wet winter.

Based at Canberra, Pepper began training back in 2009/10.

He worked under astute trainer Nick Olive before branching out on his own, but it was his time with outstanding world acclaimed sprinter Takeover Target that provided him with fantastic learnings of what makes a great racehorse.

He travelled Australia and world-wide with the Joe Janiak trained sprinter as his track rider.

It proved to be a magnificent grounding as well as showcasing his natural skills as a horseman.

These skills came to the fore with Sixtyfourth Street.

After a short break, the filly found her way to Pepper and inside two months, a first-up 1000m Narrandera win sparked plenty of joy among her ownership group.

The attention to detail shown by Pepper was very professional, no stones were left unturned.

Updates were regular, his plans were succinct and measured.

On race day, the feeling was that of being on track, his reports and plans constant - and more importantly coming to fruition.

The $15 on offer by the corporates defied all the reasons he was giving us to why she could win, the smart owners lapped up the extra spoils.

For Pepper and thanks to his delivery of the win, it was the extra spice that was needed for her career as a mum.

The filly will race once more before being served at Newgate, potentially at Gundagai on August 2nd.