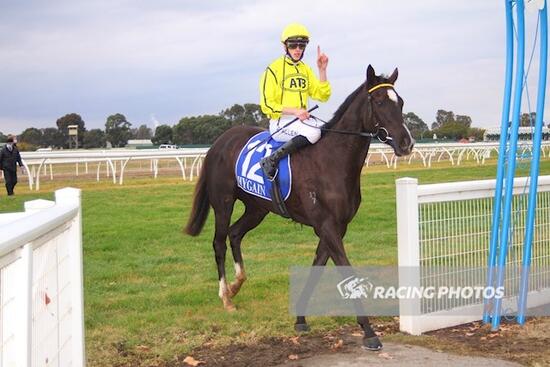 The stamp from dad to daughter is very evident by eye and while early in her career, the athletic signs are similar as well.

In fact she is one step ahead of dad having won at her second start, dad took three starts.

From this point things get tougher, the 'old man' won his next three starts before running second in a G3 race at Goodwood.

But for now the Wangaratta 1580m Maiden win by almost four lengths is a lovely moment for all her owners and breeders to savour.

Archie Alexander and his stable (and owners) have been patient with her, the rewards for that now showing through.

She is with a stable that will continue to encourage the best from her long term.

A very athletic filly, she improved immensely in all forms after racing 'greenly' for a third placing on debut at Donald.

Beautifully handled from a tricky barrier by Ben Allen, the pair cruised into the race upon straightening for home.

To pick them up and run away for a convincing win on testing ground during the final 150m was the most impressive part of the victory.

Depending on how she comes through this run, staying at a similar distance or stepping up in trip look well within her capabilities - another trait of versatility she has inherited from her dad.