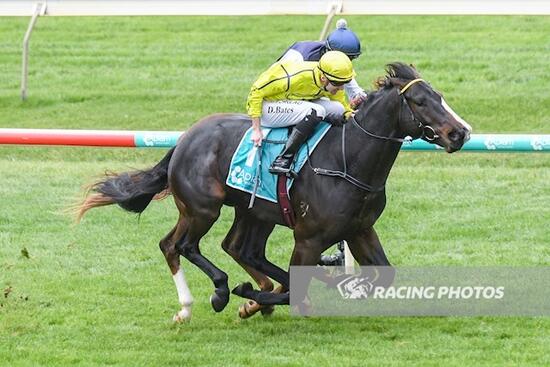 With the classic 3YO races only months away, his placings were behind strongly credentialed opposition.

But racing can deal up some untimely events and with the 'Prince' his was life and death.

An extract (below) from the diaries of trainer Archie Alexander explains the whole ordeal.

Crackerjack King, a Stolen Steak and a Bear in Shining Armour

One evening, Archie returned to the kitchen after putting Theo to bed (the Alexander's son), ravenously hungry after a long day training horses, but full of anticipation at the steak he was about to prepare for dinner. Having left it on the side in the kitchen fifteen minutes earlier, he was a little perplexed when it was no longer there. After checking the fridge, the oven and some other less logical places, it suddenly dawned on him  that Bear, our labradoodle, was looking very sheepish curled up on the sofa. Sure enough the trails led straight to Bear and that was Archie's night ruined. Or so he thought.

Poor Bear was banished to the garden for the rest of the night and poor Archie was left reeling with hunger. An hour or so later Bear, normally a very quiet, placid dog, started aggressively barking. After a few minutes of this subsiding we realized Bear was actually trying to tell us something. Archie went out to investigate, and sure enough there was Crackerjack Prince, in pain obviously colicking. We immediately got the horse to the Vet clinic where they performed life-saving surgery. The Vet told us we were extremely lucky to have found him when we did, as had they not got to it until morning, it was likely to have had a very different outcome.

First-up over 1400m at Bendigo as a raging $1.30 favourite, the son of Crackerjack King sat outside the leader for a tradesman like win - nothing fancy, but strong as he slowly got the better of leader Shoot Ur Shot to win by a head.

It was a confident and smart ride by Declan Bates, he had the best horse in the best position for the best result.

The 3YO will only improve from this outing and the dreams of his owners can begin again after being placed on hold.

For Bear, he deserves another steak!