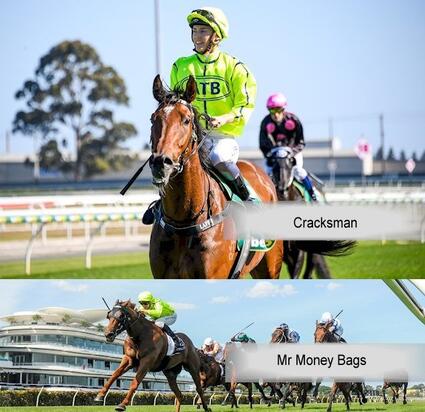 Lindsey Smith and winning ways go hand in hand, and for the owners in two ATB gallopers that experience came along quickly during the past few days.

The affable horseman continues to train many winners in his native state of Western Australia, but for most Victorians it's only been the past two years they have seen him plying his trade in the east.

Setting up base at Warrnambool in 2019, Smith was quickly winning races statewide, including Group One successes with two of his favourite warriors in Black Heart Bart and Scales Of Justice.

Smith is old school in many ways, but his training techniques which revolve around heavy sand work is the modern way for success.

A horse's longevity is also extended, giving the owner more bang for his buck.

Soundness issues can quickly curtail a promising career, but the use of sand seemingly helps, trainers like Smith vouch for this through their Veterinary bills.

Even the simplicity of the serenity surrounding the use of sand, whether it's at the beaches of Warrnambool or his farm in Perth has a big impact on the horse's mental approach.

Cracksman was purchased online, and quickly filled with owners on the premise of Smith being the trainer.

Formerly with Danny O'Brien, the 5YO son of Zoustar had solid form that gave hope of plenty of fun for his new owners.

Going to Smith was a no-brainer, the training techniques would have been very similar at Barwon Heads with O'Brien.

After three excellent runs in his new colours, winning ways returned at Geelong on Friday.

A comfortable three length win under the guidance of Laura Lafferty gave the owners a quick result, with plenty more to come.

Most would not have heard of Cracksman three months ago, but now they have a winning photo on the wall, courtesy of the very popular Inglis online sales.

Mr Money Bags was the other horse to arrive at Smith's Warrnambool base, but for different reasons.

A terrific horse under the guidance of Robbie Griffiths and his team, 'The Bagger' won five city races and over half million dollars in stake earnings during his three years at Cranbourne.

Alas, during the past two years, frustratingly his race day number was only semaphored once as a winner, bad luck seemingly latching onto his saddlecloth each time he was saddled up.

A change was muted and after ownership discussions, he made his way to Smith's seaside stable at Warrnambool during mid-November.

A new environment, training technique and some added good luck was hoped for and while the son of Written Tycoon took a couple of weeks to adapt to the beach and its surrounds, he appeared a happy horse based on his one trial and then gallop last week.

Smith, as well as he knows his horses, still needed to see something in his first start for the stable at Flemington on the weekend.

Based on the fact the horse had not won for so long, he could not give the owners a solid leg-up about his winning chances.

But after a patient Ethan Brown ride in what was a messy stop start race, the 'Bagger' returned to winning form over 1400m on his favourite track.

It was a great result, but certainly one with mixed emotions considering the journey with the Griffith's team.

While Cracksman will head to a BM64 over 2600m at Werribee later this month, plans for Mr Money Bags have changed.

Originally being aimed at the seaside carnival at Warrnambool, sights now have to be lifted to summer city tracks in Melbourne, especially Flemington.

A big track horse with all six wins at either Sandown or Flemington, keeping him fresh and around 1400m seems a sensible way to approach his twilight days as a racehorse.

Winning ways over the weekend with Lindsey Smith and his team was a new experience, but one that many owners enjoyed!

Come and join other ATB owners, we have racehorse shares to suit all budgets. Click here to view.