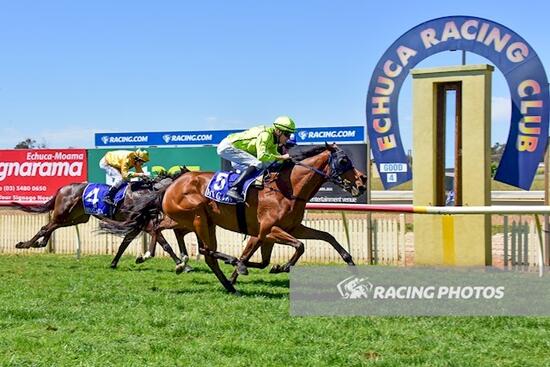 Winning a race is very rewarding for all owners.

For the connections of Mazy Motion, her Maiden win at Echuca on Monday was extra special considering the long journey she took everyone on.

Nine months earlier, the dream of any win seemed all but over when injury issues forced previous trainer Archie Alexander to recommend retirement.

From her early days, Mazy Motion was always very immature physically and her appetite always restricted her training regime.

The one full preparation she had with Alexander was very promising, showing signs that she might one day emulate her dual city-winning mum Flying Hula.

But that all came crashing down at her next preparation.

All the issues mentioned above, were capped with a tumble over a fence and her career seemed doomed.

Australian Thoroughbred Bloodstock boss, Dance Dance with the backing of the owners decided on a lengthy spell while deciding on what course to take next.

The long paddock spell helped the mare turn the corner from a maturity perspective - she really grew into herself, not dissimilar to mum during her race days.

After five months it was a relatively easy decision to put her back in training.

A beach location was going to suit the mare and on the back of a previous recommendation from Ciaron Maher & David Eustace we again went with Patrick Ryan after the work he did with Penthouse Playboy.

A very hands on trainer, with the ability to use an isolated beach all year round, Pat and his team slowly built the mare up over three to four months.

Off the back of three trials, the mare was ready to race, but after fifteen months away from race day, it was a matter of her 'match fitness' for a better term.

A good barrier, along with the fact Jordan Childs had previously ridden the mare, gave us hope of a top four finish and a nice platform to build into her preparation.

But as history shows, she is now a very deserving winner after an outstanding training effort by Pat and his team.

And when mentioning the word 'deserving', each and every owner fits the bill as well.

May many more wins come your way.

If you would like to share in racehorse ownership, come and join ATB, we have budgets to suit all people and more importantly we race with you!