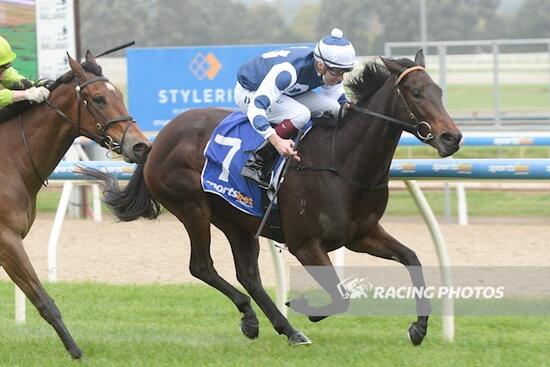 Capriccio's first-up win in the Suez 3YO Maiden Plate at Ballarat is the first step in an ambitious Spring campaign.

The Daniel Bowman trained filly dominated Sunday's race from the front and despite just holding off second-placed Ice Ice Baby, plenty of fitness improvement is expected.

Bowman originally had the filly accepted for 1100m events at Hamilton and Geelong, before settling for the Ballarat race over 1200m.

Some steady mid-section splits enabled stable rider Declan Bates to kick strongly in the home straight before holding on to win by a neck.

Both Bates and Bowman stated post-race that the filly will be best ridden from behind as she rises in class.

She was seemingly 'floating' in front and had a tendency to wait for her opposition.

A four length margin back to the third-placed Pride Of Jenni is generally an indication of above average ability for the first two placed horses.

Bowman suggested post race that the Dance & Liz Dance bred filly will now be aimed at some black type races.

Both races are for fillies over 1200m.

If you would like to get involved in racehorse syndication, Australian Thoroughbred Bloodstock have shares available to suit all budgets.