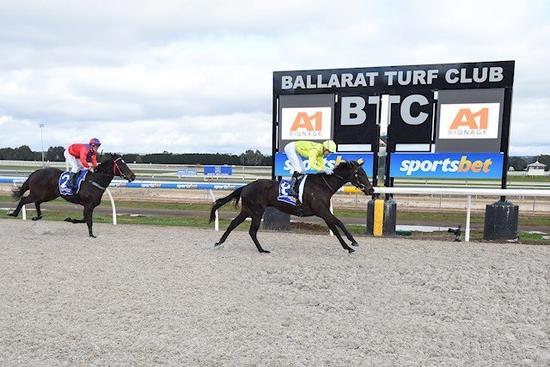 Miss Tenthousand recorded a well-deserved win when accounting for her rivals in the A1 Signage Filles & Mares Maiden Plate over 1500m at Ballarat yesterday.

After finishing runner-up at her first three career starts, the half-sister to five-time Group One winning star Boban scored in easy style.

Settling just off the pace, leading jockey Jye McNeil made his move at the 500m mark on the 3YO filly. Hitting the front early in the home straight, the daughter of Spirit Of Boom kept going strongly to win by just over two lengths.

Raced on lease from Queensland breeder Tony Thomas, ATB owners can expect the filly to improve once again next season.

Thomas raced the mother Kenbelle, herself a Group One winner when scoring in the 1996 AJC Oaks.

The training combination of Ciaron Maher & David Eustace who have been very patient with the filly, made the correct decision to scratch from Pakenham on Sunday to contest this race against her own sex.

With strong form credentials around Silver Bowl placegetters, Stretto and Over The Sky, the filly started a short-priced $1.45 favourite.

Plans are now to spell and allow the filly to furnish.

If you wish to pursue racehorse ownership, Australian Thoroughbred Bloodstock are a syndication business that have specialised in offering various forms of shares over a sustained period of 25 years.