SIRIUS DEAL BACK IN WINNING FORM 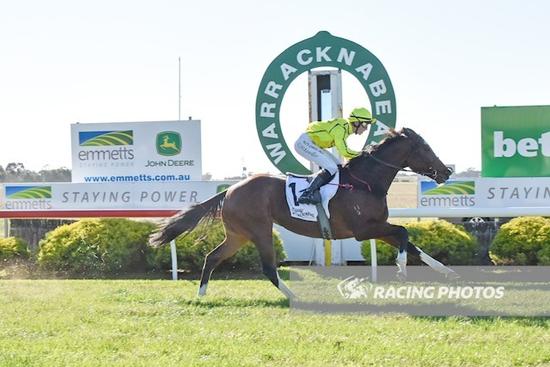 Campbell Rawiller produced a ride his father Nash would have been proud of when winning on Sirius Deal at Warracknabeal on Saturday.

Just when the door was about to shut on the duo in the Pony Xpress 0-58 Handicap over 1800m the first year apprentice moved off the fence to avoid being dragged back by race leader, The Mitre who was tiring.

Avoiding his heels and forcing a gap one off the fence, he darted through for what eventually was a comfortable two and a quarter length victory.

Cumani has held his faith in the gelding and the placement at Warracknabeal and back in trip did the trick.

While plans were too lead, early race speed meant taking the medicine of being behind the leader on a tight track.

Luck did play its part, but it also highlighted he is comfortable when the speed is on in his races.

Congratulations to his breeders who along with Darren & Liz Dance produced this son of Dundeel from their broodmare Sirius Miss.

A big well done also goes to the owners who bought into the gelding, he looks set to win more races.

If you would like to share in racehorse ownership, you can join Australian Thoroughbred Bloodstock syndications, we have shares to suit all budgets.