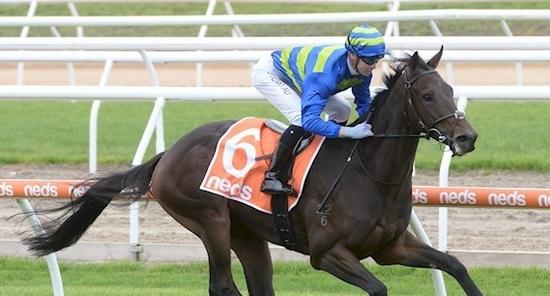 Chippewa Square lived up to the 'chip off the old block' saying when winning on debut at Mornington over the Easter long weekend.

Eleven years earlier his dad, the ill-fated Jakkalberry did similar on debut in Italy under the care of trainer Marco Botti.

The Ciaron Maher & David Eustace trained 3YO jumped straight to the lead, giving Jye McNeil an armchair ride in his six length victory over 1500m.

Jakkalberry's winning debut was at San Siro over 2000m, but he only had a nose to spare on the line.

But that narrow victory was the beginning of a brilliant 28 start career that netted eleven wins including Group One success in the Di Milano (2400m) in Italy as well as four other stakes successes.

The memories of those Jakkalberry days which included a third placing behind Green Moon in the 2012 Melbourne Cup, now lives on for some ATB owners who have also invested in Chippewa Square.

Darren Dance and his team of owners were able to secure Jakkalberry in 2011 and while he only had a handful of starts under the ATB banner, the Melbourne Cup placing was one of a number of highlights including the 2012 Arlington St Leger in the USA and Group 2 City of Gold win at Meydan in Dubai.

The owners that trekked the International path to those victories will never forget the experience.

Unfortunately his career at stud at Novarra Park in New Zealand ended prematurely when the son of Storming Home was euthanised after suffering a gut infection.

A promising career at Stud was over, on passing he was second on the New Zealand listings for first season stallions.

Chippewa Square is obviously another of his progeny showing great early signs.

Entered in the 2018 New Zealand Ready To Run Sale he caught the eye of Will Bourne who is Bloodstock Manager for the Maher team.

A quick call to Darren Dance soon had 30% of the ownership taken by ATB clients, and as stated, by some who also raced Jakkalberry.

While the heights of his father will be tough to reach, the 3YO gelding out of Savabeel mare, Emma Savanna could not have been any more impressive, albeit in a weak Sunday Maiden.

Almost as impressive as his name Chippewa Square, a square in Savanna made famous by Forest Gump.

To get involved in a racing syndicate with Australian Thoroughbred Bloodstock you can click here to view our sales page or simply call Darren or Peter for information on upcoming horses.